CSLEA, ASA-DOJ and Attorney General Meet With New DOJ Special Agents "As these Special Agents go up against some of the most dangerous criminals out there, our hope, wish and prayer is that they return home safely to their families." - CSLEA President Alan Barcelona 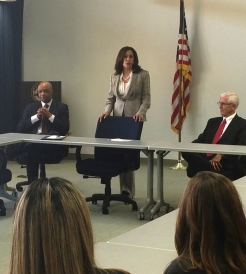 On October 23, 2014,  California Statewide Law Enforcement Association (CSLEA) Senior Legal Counsel Jim Vitko and Association of Special Agents-DOJ (ASA-DOJ) President Al Cardwood attended a meeting in Los Angeles in which they and Attorney General Kamala Harris welcomed 14 new Special Agents to the Department of Justice.  Also in attendance at the meeting were DLE Director Larry Wallace, BMFEA Director Mark Geiger and the Chiefs from BMFEA, Bureau of Firearms and Bureau of Gambling Control.   The meeting was held at the Los Angeles Office of Attorney General.

Harris told  the 14 new Special Agents they were the first DOJ class since 2008.  She said, since the layoffs in 2011, DOJ has  been working hard to restore funding to critical law enforcement programs.  She told the Special Agents this class was a huge victory for DOJ and the people they are sworn to protect.

Most of the new Special Agents will be assigned to the Bureau of Firearms or to the Bureau of Medical Fraud and most will be assigned in Southern California.  Many of the new Special Agents formerly  worked as Agents or Investigators for California Alcoholic Beverage Control, Department of Insurance, Department of Consumer Affairs or the Employment Development Department.

“I was very excited and humbled to meet with these new Special Agents and see the excitement in their faces," said Cardwood.    "I gave them the straight facts about now working for a highly political department and the importance of the CSLEA Legal Defense Plan. I wanted them all to understand ASA-DOJ and CSLEA stand united and ready to protect their rights and conduct labor negotiations with the interest of all ASA-DOJ members in mind.”