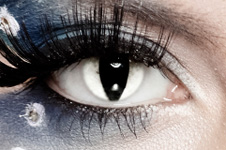 When investigators from the California Department of Public Health (CDPH) and the Department of Consumer Affairs (DCA) teamed up with federal law enforcement partners to uncover the sale of cosmetic contact lenses without a prescription, they found plenty of illegal activity.

In the first week of November, their Los Angeles area investigation, dubbed Operation Cat Eyes,  lead to criminal charges against 12 people and businesses now accused of illegally selling cosmetic contact lenses, some of which were contaminated with dangerous pathogens.

"Our CDPH and DCA investigators tackle this every year around Halloween and every year they find retailers willing to put someone's eyesight at risk just to make a buck," said Alan Barcelona, president of the California Statewide Law Enforcement Association (CSLEA) which represents the investigators.  "This operation works to protect unsuspecting consumers and charge those who sell contact lenses without a prescription. "

Buying and wearing cosmetic contact lenses without a prescription can be harmful to the eyes and even lead to blindness.  In two of the cases, investigators found contact lenses that were contaminated with bacteria known as Bacillus cereus.  According to court documents, the Bacillus cereus bacterial strain can cause severe infections that, even with prompt treatment, can lead to blindness.

Operation Cat Eyes targeted retail stores – some of which were opened specifically for Halloween – that sold cosmetic and decorative contact lenses without a prescription to unsuspecting consumers in Southern California.

Contact lenses – whether corrective, cosmetic or decorative – are considered to be prescription medical devices subject to FDA regulations. Due to the risk of injury, blindness and possible eye infection, all contact lenses require prescriptions from medical professionals who can provide guidance on the proper care and maintenance of the contact lenses.

Mike Honabach, 45, of Highland, the owner of Halloween and Party Discounters, Inc.

Eunju Kang Savvidis, 53, of Jacksonville, the manager of Intertrade

(a Corona-based company that operates T-Shirt Mart in Glendale)

Zinaida Khrimyan, 25, of Glendale, the owner of HTS

Patrick Abedi, 30, of Glendale, the store manager for HTS

All 12 defendants are scheduled  to appear for arraignments in federal court in Los Angeles on December 9.

All of the charges filed in Operation Cat Eyes are misdemeanor offenses that carry a statutory maximum penalty of one year in federal prison and fines of up to $100,000 for an individual and up to $200,000 for a corporation.