Conservationist Jimmy Teegardin Retires "All I ever wanted to do out of high school was work and live in the mountains. Nearly 37 years later, I have a lump the size of Half Dome in my throat as I reflect on the many highlights and experiences I had with CCC." - Conservationist II Jimmy Teegardin 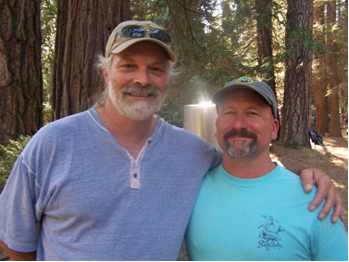 After nearly 37 years working for the California Conservation Corps, California Statewide Law Enforcement Association Member and Conservationist II Jimmy Teegardin is heading down a different trail, the path of retirement.   His decades-long career with CCC began in 1978 after his father came across a CCC flyer and thought,  perhaps, this could lead to a happy, fulfilling future for Jimmy.

"All I ever wanted to do out of high school was work and live in the mountains,"  Teegardin reflected, as he wrote his parting words to fellow conservationists.

Teegardin got his wish after six-months on a waiting list.   In March 1978, he entered the 9th session at Bret Harte Academy.   He immediately  got more than he bargained for.   "My first real work assignment during training was unloading a stake side full of chicken manure," recalled Teegardin.

"The guy helping me could not handle the smell and was tossing his cookies over the side!   Guess that would be one of my first real tests of  how badly I wanted to be in the CCC.  Governor Jerry Brown came to speak with all of us as we graduated at the end of the month.   Over the years I would bump into him at events...looks like he is out lasting me."

That's how Teegardin started his CCC career.  He finished as Silverwood Lake Camp manager, overseeing the move of  the Silverwood Lake Tent Camp to its new home at Lake Camanche.  "My last assignment allowed me to spend my last summer with CCC with crews outside and an office with a view," said Teegardin. 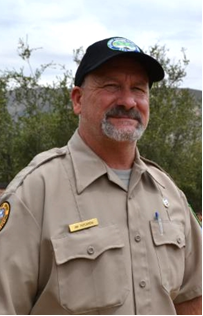 "I always admired Jim's work ethic and willingness to bust his ass," said longtime coworker and friend, Dan Diederich.  "Definitely a person worth emulating and he was by many.  There wasn't a corpsmember that didn't think highly of Jim."

Teegardin recalls,  in 1979, discovering  he could actually earn a paycheck spending a summer in Yosemite.  He  begged to be assigned and considers himself lucky to have joined the 1979 Back Country Trails crew.  He returned  to the back country trails program in 1990 as a supervisor of the Kings Canyon crew. 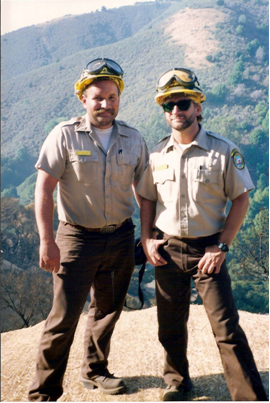 Teegardin also relished his assignment as conservationist-I at Mt. San Jacinto Camp for three years beginning in 1981.    "We had four fire crews, hosted the 40-hour fire training for Southern California crews and spiked from the Colorado River to the top of Mt. San Jacinto and Mammoth to the north," said Teegardin.   "We had one heck of a team and community during those years and we were known as the MSJ Cold Shots." 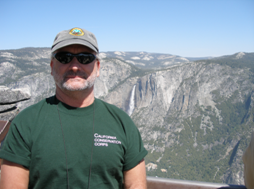 Teegardin went on to work at centers from Siskiyou and  Tahoe, to Monterey Bay and San Gabriel.  He was involved in special programs including  the Greater Yellowstone Recovery Corps where CCC crews helped to  repair damage from the 1988 fires.   He also went “down under” with the Australian Exchange and hosted the Aussies countless times over the years.  He worked several years at the training academy.

He also realized the importance of taking an active role within the CSLEA affiliate, the Association of Conservationist Employees (ACE) and became an ACE board member in the early 80's..

"It takes a dedicated person who is devoted to his career and his colleagues to step up and become an association board member," said CSLEA President Alan Barcelona.  "I thank Conservationist Teegardin for his service to the State of California, on  the ACE board and as a valued contributor to CSLEA.  I wish him the very best in his retirement." 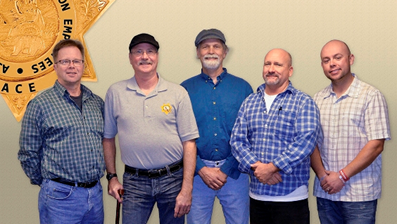 "Jimmy has an 'aura' about him that is unmistakable," said Former ACE President and retired CCC Conservationist Jim Kastner.  "Jimmy was always up to the task.  Whenever I saw him on a flood, or fire, or other emergency, he was taking care of business.  I relished his thoughts when we worked together in ACE and his opinion was one that I took seriously."

"All and all I’m proud of what we have done over the years in the CCC," said Teegardin.  "Anywhere you go in California,  one can say that CCC has worked here. I have CCC friends and co-workers near and far that will last me the rest of my life time."

So what's next for Teegardin?  Disneyland with the grandchildren was first on the list.  "As I walk around the park with them, you can bet it will bring a tear to my eye to see the joy in their little faces.  I am a lucky guy to have enjoyed such a great career in the CCC."