Patton State Hospital Police Protect, Serve & Provide Officers Go Above & Beyond The Call Of Duty To Help Kids In The Community 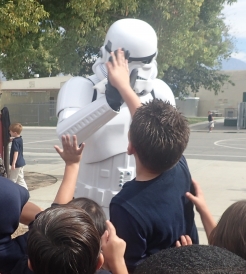 When police officers at Patton State Hospital heard there was a dire need for physical education equipment at a local charter school, they and the Patton State Hospital communications operators jumped at the opportunity to help.  What happened next was an outpouring of support, fun and the type of giving-spirit you expect to hear about during the holidays. 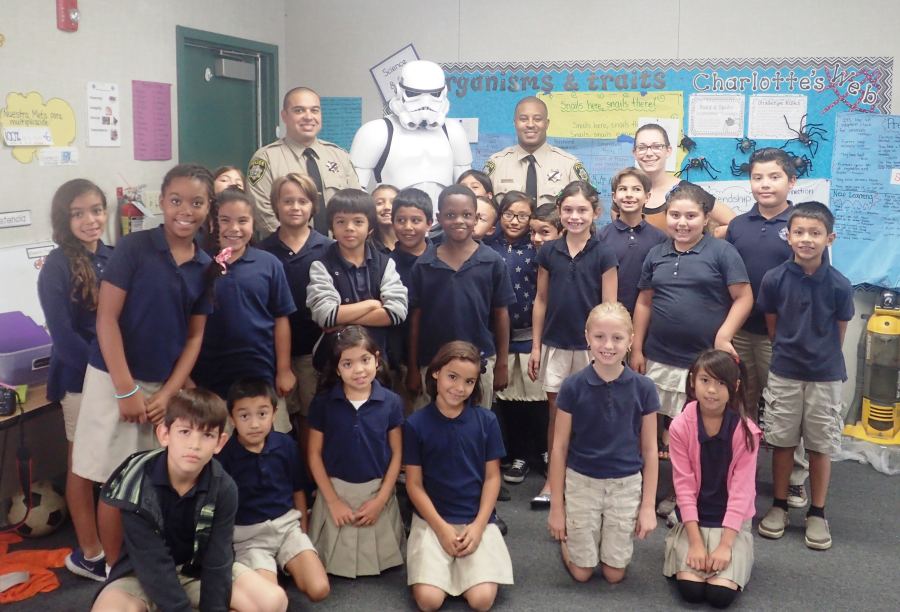 "It's all about the kids" said Officers Maurice Wilson and Freddy Cruz, both of whom spearheaded a donation drive called "Operation Donate to a School."

Taking it up a notch was Officer Tim Hasick, one of the newest officers at Patton State Hospital, who accompanied Officers Wilson and Cruz to the school on October 30, 2014, as a  Storm Trooper. 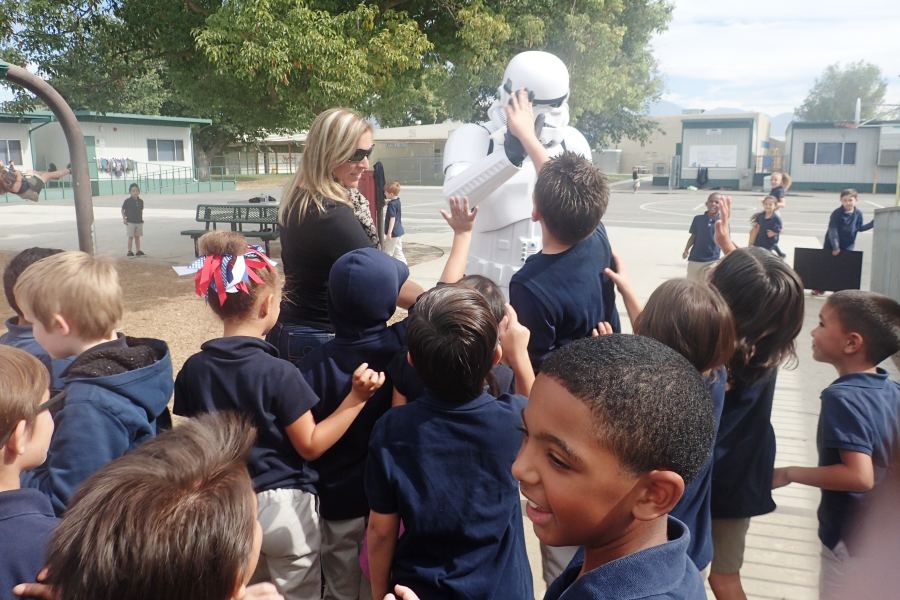 Operation Donate to a School began August 25th  with flyers distributed throughout Patton State Hospital and the Patton State Hospital police station.   Throughout the months of September and  October,  a wish list provided by the Norton Space & Aeronautics Academy in Highland, began to be filled.   Parts of the police station started to look more like a school playground as donations of new equipment were dropped off: baseball bats, balls, tees, gloves and bases, basketballs, footballs, soccer balls, ball pumps, and storage bags. The giving did not stop there.  There were jump ropes, hoola-hoops, volleyballs and whistles.  By October 30th, more than $400.00 in physical education equipment was ready to be delivered. 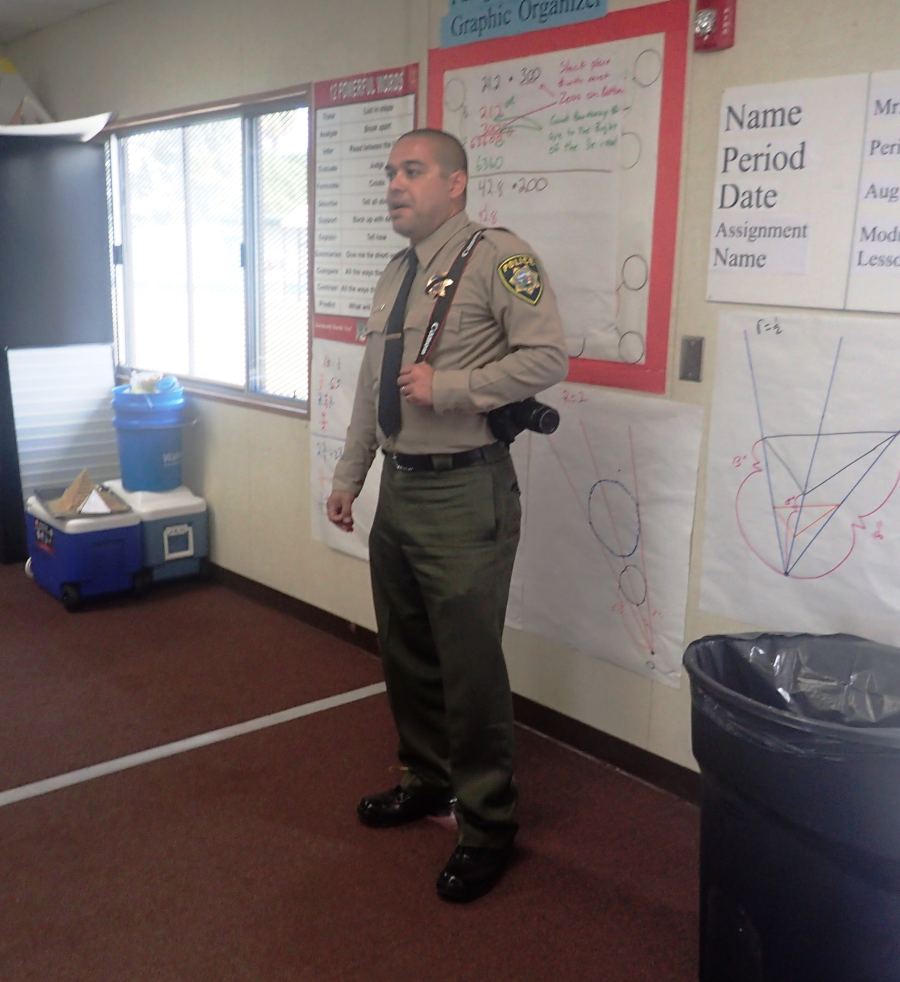 "Officer Cruz, S. Trooper and I dropped off the sporting equipment to Norton Space & Aeronautics Academy and its fourth grade class," said Officer Wilson.  "Officer Cruz gave a very meaningful speech to the class and S. Trooper posed for pictures with faculty and children at the school. "

"Officer Hasick dressed up in his Star Wars Storm Trooper uniform and the children were screaming with joy when we arrived," said Officer Cruz.  "I feel very happy that I could be a part of making a difference in the quality of education of so many children.  We plan on making this an annual event and to expand it to help children in other schools, too." 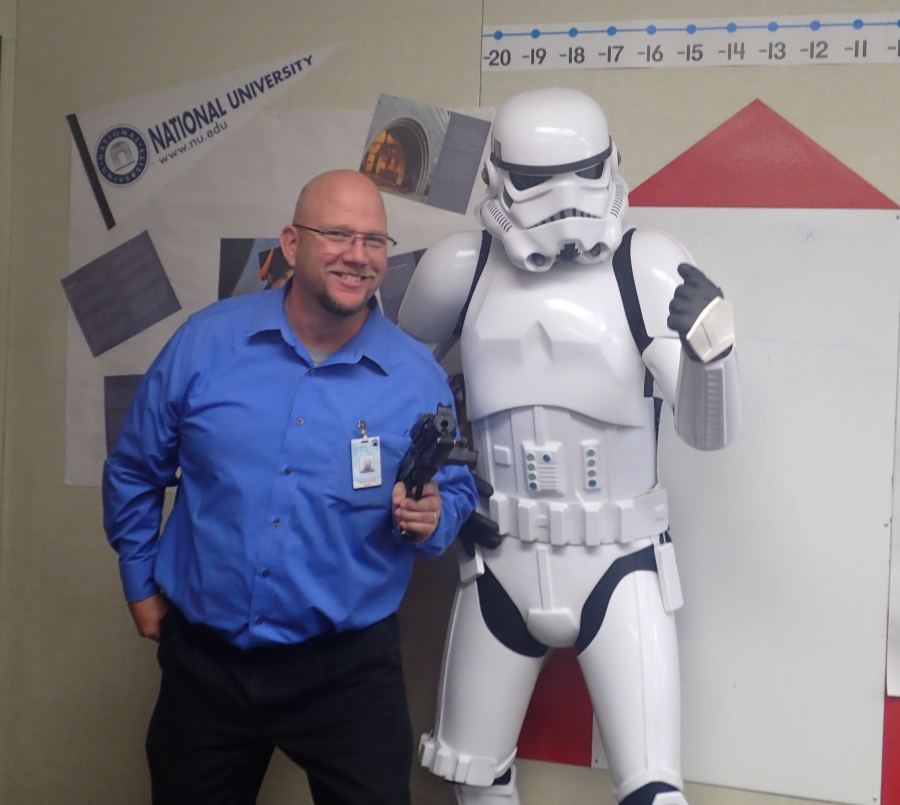 The officers would like to thank all those who donated including Patton State Hospital staff, officers, communications operators and their own Patton State Hospital Police Department Police Officers Association.   "The generous support makes it possible for our police department and our association to exist and makes Patton a great place to work," said Officer Wilson.

"The time, energy and caring these officers  put into Operation Donate to a School exemplifies why the California Statewide Law Enforcement Association strives for the very best for our members," said CSLEA President Alan Barcelona.  "Not only do our state hospital police officers protect and serve their communities, they provide for them as well.  Currently state hospital police officers are increasingly understaffed, underpaid and overworked.   Despite exhausting days and nights of overtime and time away from their families, these officers at Patton State Hospital have stepped up for children who need physical activity as part of a healthy life.  They are shining examples for all of  us."

"Where we live, there are some areas with a lot of poverty," said Patton State Hospital Police Sergeant Christopher Centner.  "Even though our officers don't make much, they are willing to spend their hard-earned money to improve the lives of the children, our future!  I like the fact that the officers here are working together and helping out schools in the area."

Tim Hasick (AKA Officer S.Trooper) - joined the Patton State Hospital Police Department a year ago.  He was previously a member of the Shasta County  Sheriff's Department as a correctional officer.  He has been making appearances as a Storm Trooper at nonprofit events for three years.  Officer Hasick has integrated in the department well and has quickly  demonstrated a willingness to enhance the image of the police department.  In October, Tim was officially recognized as a member of the 501st  Legion (TK15054).  The organization is officially recognized and licensed by Lucas Arts.

Maurice Wilson -  joined the Patton State Hospital Police Department four years ago. He has been involved in the field training program as a training officer and taking on additional duties gathering information on individuals that have a history of gang involvement.  Maurice has put together numerous fundraising events for the PPOA and has taken a lead in volunteering his time to the organization.  This was the second year Maurice has spearheaded the donation drive and the success was largely due to his contributions.

Any Patton State Hospital Police  Officer who knows of an elementary school in need of athletic equipment should contact PPOA to be considered for next year's drive.