In light of the recent anti-police rhetoric, this day is designed to demonstrate to law enforcement officers that they have the support of the American public and that the majority of law-abiding citizens are grateful for their protection, sacrifice and service to us all.

"Law enforcement officers are among America's finest," said CSLEA President Alan Barcelona. "They put everything on the line when they go to work each day or night. Just listen to a police scanner for any period of time and you'll hear for yourself. Officers, nationwide, respond to thousands upon thousands of calls a day, 24-hours a day, seven days a week, 365 days a year. They are heroes in the way they face extremely dangerous situations. In a fraction of a second they have to make decisions, based on training and instinct, regarding what level of force may be needed to stop the danger they are presented with. Most of those decisions are right. In a rare instance, there may be a sad, tragic mistake or a misjudgment in the level of force. Law enforcement officers are worthy of our thanks and respect."

"What happened to New York City Police Officers Wenjian Liu and Rafael Ramos on December 20, 2014 was tragic and senseless and we cannot stand by quietly and listen to misguided individuals spread hatred for our officers," said Barcelona. "On behalf of the nearly 7,000 law enforcement, public safety and consumer protection professionals whom CSLEA represents, I have reached out to Patrick Lynch, president of NYC Patrolmen's Benevolent Association to express our deepest sympathy and our support. And I am committed to promoting the national campaign by C.O.P.S. to make January 9, 2015 Law Enforcement Appreciation Day."

On Friday, January 9th, those who wish to show their support for our nation's law enforcement officers will do one or more of the following: 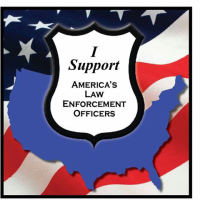