When the owners of a laundromat in Carmichael sent an email to the California Statewide Law Enforcement Association (CSLEA) January 30th, 2015, recognizing CSLEA Secretary Bernadette Gonzalez as their "Christmas Angel To Foster Children," no one at CSLEA was totally surprised by what Gonzalez had done.

"That's not to say it didn't warm our hearts, " said CSLEA President Alan Barcelona. "But that's what Bernadette does. She sees a need and she dives in." 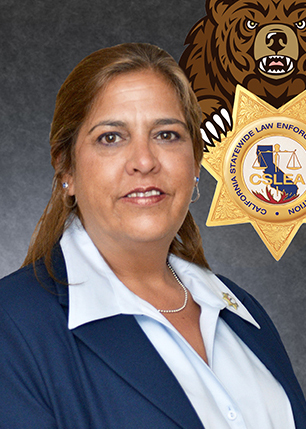 This time, she "dove in" on a grand scale. The laundromat had a giving tree with the names of foster children on it and the gifts those children would like to receive, should somebody care enough to brighten their holiday.

"When I saw that a 17-year-old boy wanted a bus pass for Christmas, I lost it," said Gonzalez. " I was instantly reduced to tears and knew that every foster child with a wish on that tree, deserved a gift."

Gonzalez told laundromat owner Jim Dawson she would purchase gifts for those foster children whose names were still on the tree when she returned to the laundromat. Not one of the names had been removed by the time she next visited the shop.

"About a week later my husband calls me at home and says the customer had come in and took all the gift cards (that remained on the tree) and was going to get everything," wrote Suds Factory Coin Laundry owner Loretta Dawson. "I was shocked and thrilled at the same time. I estimated the rest of the gifts to be about $700 to $800."

"I checked to be sure the foster agency was a legitimate agency and then I called my own, grown kids and told them we were buying Christmas gifts for foster children," said Gonzalez.

Shoe stores, video game stores, toy stores, skateboard stores - Gonzalez was on a roll, purchasing items, gift cards and the additional safety items, like bike helmets. Not stopping there, Gonzalez asked store managers and owners, if they too, would like to chip in to make a foster child's holiday a little brighter.

"Bernadette had over $500.00 in gift cards, plus a skate board, bikes, knee pads, helmet, and everything else these children had asked for," wrote Dawson. "Bernadette's wonderful giving spirit made several (23) foster children's Christmas day something they will remember forever."

"Bernadette is also a driving force behind the CSLEA Consumer Protection and Public Safety Foundation Annual Golf Tournament in which CSLEA raises money for scholarships for our members and their children," said Barcelona. "If every person had her can-do, caring attitude, every community in our country would be thriving."