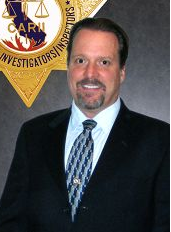 To say California Statewide Law Enforcement Association (CSLEA) Member Casey Falls passionately tackles negligence and fraud in the auto repair industry, is just the beginning.  In addition to his job as a program representative for the California Bureau of Automotive Repair's (BAR) Field Operations and Enforcement  Division in the Orange and Los Angeles County regions, Falls is treasurer of the CSLEA affiliate California Association of Regulatory Investigators and Inspectors (CARII) and a CSLEA site representative.

"As a site representative and a CARII board member, I work to ensure that all members are kept informed and that they have an opportunity to be heard," said Falls.  "Many hours have been spent to improve the 'management style' previously used to ensure a better work place for all."

Falls became a CSLEA site representative seven years ago and joined the CARII Board four years after that.

"I am proud to have Casey on the CARII Board and as a CSLEA member," said CARII President Tom Ineichen.  "I have witnessed how much he does for our members and the association.  He is a great asset and gives time unselfishly to improve our workplace and environment.  I can also say the same for the work he does for BAR and protecting Californians."

"It is so important for CSLEA and our CSLEA members to have individuals such as Casey who will dedicate time and energy to improvements in the workplace," said CSLEA President Alan Barcelona.  "I thank Casey for his time and work as a CSLEA site representative, a CARII board member and for his service protecting consumers in the State of California."

Before joining state service in 2001, Falls  was in the automotive industry for 18 years.  He  has held State Smog Check, Brake, and Lamp Licenses since 1986, he was certified as a Master 76 Technician in 1992, and has received a Master “Gold Recertification” Automotive Technician from the National Institute for Automotive Service excellence.

Falls lives in  Orange County.  In his spare time enjoys ocean diving, hiking, and camping in the Southern California coastal and island areas. He is licensed for private security, FCC radio communication, and volunteers for local safety and emergency system preparation events.