Five CSLEA Members Receive Medal of Valor For Acts of Bravery and Heroism California's Highest Honor For Public Servants - "Each of these brave and heroic individuals put the safety of someone else's life before their very own. They are true heroes and are deserving of respect, honor and our very sincere praise and thanks." - Alan Barcelona, CSLEA President

SACRAMENTO -  Five California Statewide Law Enforcement Association (CSLEA) members were presented with California Medal of Valor  awards at the CHP Academy in West Sacramento, April 23, 2015.  California's Medal of Valor is the state's highest honor presented to state workers who have demonstrated extraordinary acts of bravery and heroism in an effort to save someone's life.

The following CSLEA members were bestowed with California's highest honor for risking their own safety and/or lives to save another: 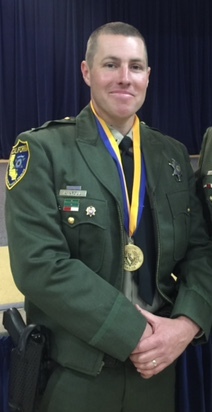 On June 17, 2011, Officer Kyle Kroll was patrolling the North Fork of the Feather River when he heard a 911 call over the county fire department radio. A vehicle had gone over a ledge and into the Feather River. Kroll was only five miles away, much closer than the other nearest emergency responders which  were 45 minutes away.

Kroll arrived on scene and saw the vehicle was off a steep embankment and resting precariously on a rock in a section of the river with dangerous rapids. A severely injured husband and wife were in the vehicle. Kroll determined he could not risk moving either passenger as the weight shift would have caused the vehicle to slip into the river. Kroll administered  first aid and relayed pertinent information to emergency responders who were still many critical minutes away.

Kroll then secured the damaged vehicle with a tow strap and chain from his truck. He carefully waded into the swiftly moving river and attached them to the front and rear axles of the car. Assisted by a PG&E worker, Kroll tied the strap and chain to a tree and a rock in order to stabilize the vehicle and prevent it from falling into the river.

Rescue personnel and California Highway Patrol officers then arrived on scene. Because of the continued risk of the vehicle falling into the river, they provided Kroll with another chain, and he again went under the car and attached it to the axle, then to a tree. Only after securing additional straps and cables could the team work to extract the victims from the car and get them to safety. 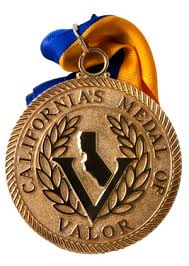 On Oct. 12, 2012, Officer Arthur Golden was driving home from training when he came upon a vehicle accident near Corcoran. A small pickup truck had gone off the road and down a steep embankment.

A bystander reported that the victim was pinned in the vehicle and not breathing. Golden quickly checked on the driver, then radioed for help at his vehicle and went back down the hill to the heavily damaged vehicle. Inside, the driver was unconscious and bleeding. The truck was perched precariously on a slope and ready to slide down, potentially rolling over.

Putting himself in great jeopardy, Golden reached through the smashed driver’s side window to assess the victim’s injuries and provide immediate medical care. While Golden was half-inside the truck, it slid several inches down the hillside. Golden pulled the driver toward him to relieve the pressure on the downside truck door and stabilize the vehicle from rolling over onto both of them.

Shortly after, local fire and rescue arrived and fully extracted the man from the vehicle and got him to safety.

Officer Golden was unable to attend the awards ceremony. 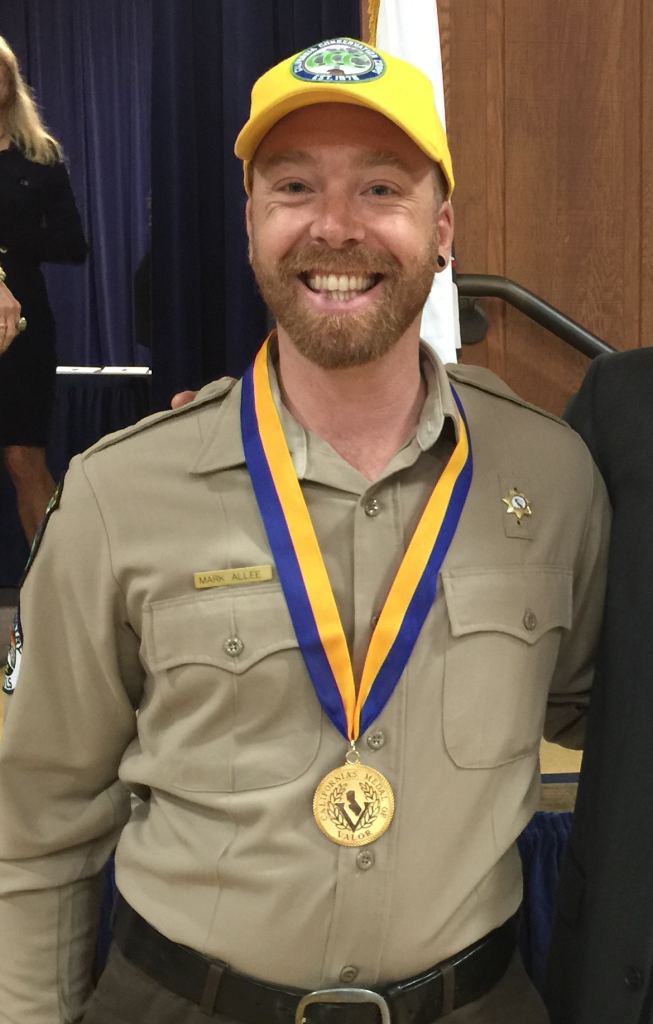 Allee received the award for his heroic attempt to save the lives of two hikers swept away by a powerful waterfall in Yosemite National Park. On June 29, 2011, following an unseasonal and  tremendous rain storm, Allee hiked to the Wapama Falls Bridge to inspect trail conditions.  Wapama Falls is a powerful waterfall in Yosemite National Park and following two inches of rainfall in 14 hours, it was flowing so ferociously, it created its own super-strength winds. Huge bursts of water were wildly tossed onto the bridge, submerging the access trail and steps.

When Allee became aware of five backpackers approaching  the bridge from the opposite side of his location, he frantically signaled for them to stop.  Due to the noise and commotion of the waterfall, his attempts to communicate with  them went unnoticed.  As the hikers began  to cross the bridge, the first two were forcefully  knocked to their knees and immediately in a life-threatening, and ultimately like-taking situation.   Allee got to a boulder downstream in an attempt to rescue them.  One hiker immediately disappeared into the flow of water, the second was caught up in a bridge rail.  Allee yelled for the remaining hikers, including the fallen hiker's wife, to retreat to safer ground.   In a valiant and life-saving effort, Allee was able to free the threatened hiker from the rain poncho he was wearing and then his backpack, both of which threatened to drag the hiker beneath the water and were quickly carried  away with the current.  Allee yelled for the hiker to grab the trust.  The hiker became exhausted and was swept away.

Despite the loss of two lives, the survivors described Allee's actions as heroic.  They commended his training, strength and courage.

On May 8, 2014, Allee received a Citizen's Award For Bravery at the Department of the Interior's 69th Honor Awards Convocation in Washington, D.C.

"I do not believe that we act courageously to gain recognition, I believe we act courageously because it is the right thing to do," said Allee.  "For whatever reason, sometimes we are called upon to act in an extraordinary way. I hope that when that day comes we all have the training , the willingness, and the faith to answer the call and if the measure of a day's work is that two little girls still have a mom to come home to, then that was a good day."

On March 2, 2011, as a manager at the Hawthorn DMV office,  Conrad Rivarde asked a disruptive man to leave the office.  Instead of doing so, the man jumped on a work station and yelled, “They are going to kill me!”  Rivarde asked the man to get down.  The man first complied, but then within seconds, he jumped back on the work station, fell backwards, and then began running around, looking back as if someone were chasing him.

The man, who appeared paranoid, grabbed a female manager and held her in front of him like a shield, then pushed her away.  Rivarde tackled the man. The man punched him in the face and escaped.  Another manager intervened by grabbing the disoriented man, telling him to calm down, and advising staff to clear the area.  As Geoffrey Holmes returned to the office after  giving a drive exam, he rushed into the building to assist.  With the help from a security guard, all three employees managed to put the man inside a stockroom until police arrived. The man was found to be under the influence of narcotics.

Rivarde and Holmes were presented with the Silver Medal of Valor