"CSLEA offered classes about upcoming contract negotiations and site representation training," said Sanchez.  "As president of CALEE, I met with Seasonal Lifeguard leaders from the entire state to discuss contract  change proposals.  This is the first time the SLGs from all over the state have met together to plan for upcoming contract negotiations.  It was a very productive session."

The first order on the agenda was to  organize the members so that they could discuss, form and draft necessary contract change proposals, and reach agreements on what proposals best serve SLGs throughout the state.  With California's diverse geography many areas have differing needs. The second order was to assign duties to draft, research proposals and to exchange ideas.  As this group of SLG leaders  form contract proposals, other meetings will be held. 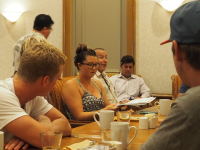 "The guards worked together as a team and the foundation has been laid," said Sanchez.  " CALEE and CSLEA look  forward to working with the guards to achieve their goals."