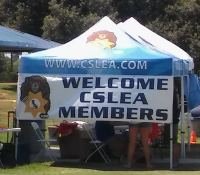 "What a fantastic opportunity to visit with our members, update them on our objectives and challenges, thank them for the public safety work they do and get them involved in their association." -CSLEA President Alan Barcelona 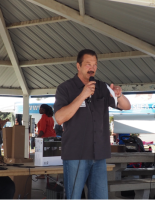 "This is a chance for me to walk from table to table, greet our members, thank them for the work they do, speak to them about strength of their association and the benefits of workers banding together," said Barcelona.  "I was also able to speak to them as a group about the 2016 contract negotiation process, which everyone is interested in."

Barcelona told the group the negotiation process is  lengthy and complicated, but involves each and every CSLEA affiliate so that each CSLEA member is represented at the table.   "The negotiation team is comprised of myself, the three CSLEA vice presidents and CSLEA's chief counsel," said Barcelona.  "The presidents of each affiliate are brought in, as well as any members who have expertise on a bargaining issue."

Barcelona also stressed the importance of each and every job classification within CSLEA Bargaining Unit 7, stating, together, and only together, can consumer protection, public safety and law enforcement be successful. 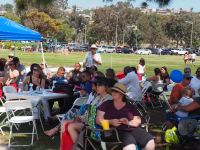 "Our membership fiesta lunch and activities were a huge success and made all of the work putting it together, worthwhile," said CSLEA Senior Vice President Tina Brazil.  "We had lunch with more than 240 of our members and their family members.  I want to thank the CSLEA events staff for doing a great job and a big thank you to all the members and their families for sharing their day with CSLEA, it was all for them." 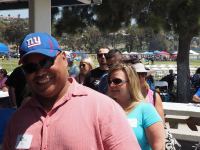 Five CSLEA affiliate boards held their quarterly meetings in conjunction with the education and appreciation events in an effort to encourage members to attend and learn more about participation.

CSLEA families enjoyed a carnival of lawn games for the children, including a piñata and face painting by Michael and Shaughnassy Bradley, wife and daughter of State Employed Fire Fighters Association (SEFFA) President Steve Bradley. 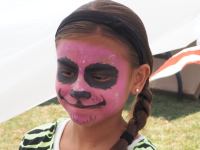 "This was such a great mix of sworn and non sworn CSLEA members coming together," said Brazil.  "We all work together in our various roles to keep Californian's safe.  It takes a team and I am very proud of our team."