SACRAMENTO- On Monday, September 14, 2015, Governor Jerry Brown awarded the State's Public Safety Medal of Valor to two  law enforcement officers for their courage during extraordinarily tense and life threatening moments encountered in the line of duty.

"The Governor's Public Safety Officer Medal of Valor Award is the highest award for valor and courage presented to public safety officers by the State of California," said California Statewide Law Enforcement Association (CSLEA) President Alan Barcelona who serves on the Medal of Valor Review Board.  "San Bernardino Police Officer Marcus Pesquera and Sonora Police Field Training Officer Ryan Webb demonstrated courage in protecting officers and citizens under extreme pressure.  I thank them for their service and congratulate them."

The Medal of Valor Review Board received 43 nominations involving 13 incidents.  Governor Jerry Brown told those who attended the ceremony that the two officers receiving the Medal of Valor demonstrated courage, and courage is what it takes, when you can be certain there are people around the corner who will second guess your actions.

On August 22, 2014, Officer Marcus Pesquera, a recent academy graduate and in training for one and a-half months, was on patrol with Field Training Officer Gabriel Garcia when the pair approached, on foot, a group of subjects surrounding a vehicle.  The subjects were standing apart,  so the officers moved away from each other by several feet.  Officer Pesquera heard Training Officer Garcia say words to the effect of "come over here" and "let me see your hands," and immediately heard a gunshot.  Unbeknownst to Officer Pesquera, Training Officer Garcia had been gravely wounded by suspect gunfire.  Officer Pesquera notified dispatch that his partner was down, and that he was engaged in a gunfight.  He reloaded his service weapon several times and continued to engage the suspect until he neutralized the threat to both himself and his fallen training officer.

Due to Officer Pesquera's courage under fire, he quickly ended the suspect's assault.  His heroic actions allowed officers and medical personnel to safely and swiftly reach Training Officer Garcia.   Garcia was rushed to the hospital where he received emergency medical treatment for serious head and chest injuries.  He is continuing to recover from his injuries.

Of the numerous rounds fired by Officer Webb, non struck any of the bystanders in downtown Sonora. 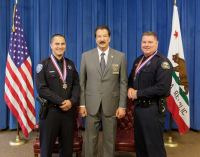 "Serving on the Medal of Valor Review Board is an absolute honor and is one of the most enjoyable things I do as president of CSLEA and FOP Lodge 77," said Barcelona.  "Law enforcement officers are among the bravest individuals in our society, facing danger on a daily basis to protect the citizens of their communities, many of whom they have never met. "