It's about helping each other to help others.  Together we can all make a difference in the lives of public safety professionals as well as members of our communities." - CSLEA Senior Vice President & CHP-PSDA President Tina Brazil

ELK GROVE -When CSLEA Senior Vice President and CHP-PSDA President Tina Brazil learned of the of Elk Grove End of Watch Fund, its fundraiser and its mission, she said, "Of course we can find a way to help."

The Elk Grove End of Watch (EOW) Fund's primary mission is to assist the employees of the Elk Grove Police Department and police departments throughout the United States.  In addition it strengthens its bond with the  community through outreach projects such as "Santa for Seniors" and "Caring Kits" for those undergoing cancer treatment. 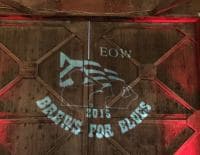 On Saturday, October 10, the Elk Grove EOW Fund held its second annual Brews for Blues fundraiser at Lent Ranch in Elk Grove.  The well-attended event raises money for snack packages for every officer who attends the funeral of a fallen officer.

"This was the fantastic idea of our treasurer Jamie Hudson and his wife, Mona," said Elk Grove EOW Secretary and Elk Grove Police Department Dispatcher Mandy Tovar.  "They had the idea of creating snack bags for all officers who attend these funerals along with bottles of water to lay on all patrol vehicles while they are in the funeral services.  We had a sticker placed on the bag, thanking them for their appearance and support and our Facebook link attached for End of Watch Fund.  Our Facebook account helped us spread the word to other agencies nationwide and they thanked us for what we did.  We also donate to the families of our fallen brothers and sisters."

"Anyone who has attended the funeral of a fallen officer knows that the day is very, very long," said Brazil.  "Officers attend out of respect for the fallen officer, his/her family, friends and colleagues.  Sometimes they drive for hours to get there, they must dress in their uniforms, arrive early for processions, stand for great lengths of time, endure the emotion of service, file out and head back home.  For them to find a package of snacks, water, even something for an unexpected headache, shows someone is thinking of them while they are thinking of others.  It's a circle of caring and I commend the Elk Grove EOW Fund for being there for all of our law enforcement officers." 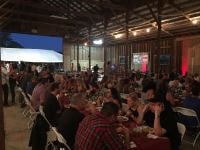 The End of Watch Fund was founded in 2009 by a group of officers within the Elk Grove Police Department who decided they needed to do something in remembrance of Sacramento Sheriff's Deputies Larry Canfield and Jeff Mitchell.  The Jeff Mitchell Wiffle Ball Tournament became their primary fundraising event but didn't really start to take off until 2014 when the idea of Brews for Blues came about.

"Then-Elk Grove EOW Fund President Dan Koontz and I were on the same shift one day, he as an officer and me as dispatcher.  We started talking about an upcoming crab feed which I wasn't going to attend because I don't care for seafood," said Tovar.  "I joked, if they had a function where beer sampling was involved, I'd be in!  It was then when Dan said, 'then plan it!'  So I did.  Less than a week after our first Brews for Blues fundraiser, we lost  Sacramento Sheriff's Deputy Danny Oliver and Placer County Sheriff's Detective Michael Davis."

Other projects the Elk Grove EOW Fund is involved with are its Caring Kits, for cancer patients undergoing  chemotherapy at the local hospitals, which include items such as  blankets, crosswords, gift cards, and slippers.

"We also have Santa for Seniors," said Tovar.  "We collect baked goods, scarves, blankets, games and deliver them at Christmas time for the elderly in Assisted Living homes.   These are folks  who wouldn't normally have such a great Christmas based on their current situation."

Tovar wishes to thank all those in attendance and who supported the 2nd Annual Brews for Blues fundraiser October 10th.  "This year was a success and will help replenish our funds from the six funerals and community outreach programs.  We are gearing up for caring kits and Santa for seniors this holiday season as well as our 2nd Annual Memorial Ball for May 2016 and Brews for Blues in October 2016. Of course a lot of this wouldn't be possible without all of our support from our sponsors.  CSLEA and CHP-PSDA have been supportive of our organization and we hope to continue building that bridge!"