WOODLAND -  The word is getting out - when it comes to consumer protection and public safety seminar presentations, there's one very dynamic and knowledgeable person you want at the microphone and that's CSLEA Foundation Chairman and CSLEA Fraternal Order of Police (FOP) Lodge 77 Vice President Kenny Ehrman.

"Kenny has spent 2015 travelling from one end of the state to the other talking to groups about how to best guard themselves from fraud," said CSLEA President Alan Barcelona.  "He engages his audience and tells it like it is, there are people out there who will do anything to get their hands on your money and knowing the latest scams that are in play is a way to protect yourself."

Ehrman, a Department of Motor Vehicles investigators, is a wealth of knowledge when it comes to identity theft.  He has a passion for public safety and consumer protection and a soft spot for senior citizens.

"I have the highest respect for our senior citizens," said Ehrman.  "I don't ever want to see any of them taken for a ride.  They have earned their nest egg, they have earned their chance to enjoy their golden years and I want to assist them in being aware of what the criminals are up to and how they can best protect themselves."

And that's exactly what Ehrman did in Woodland on October 14, 2015.  He and a number of presenters spoke to seniors at the 2015 Yolo County Senior Resource & Crime Prevention Fair. In addition to the CSLEA Foundation, senior citizens heard presenters from the Yolo County District Attorney's Office, the State Bar of California, the California Bureau of Real Estate, and Woodland Police, to name a few. 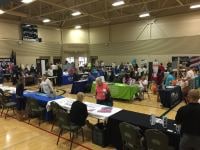 The CSLEA Foundation participates in seminars that are often hosted by State Senators and Assemblymembers in their districts.  "It is an honor to be invited by our lawmakers to speak to their constituents," said Ehrman.  "We speak to some of the most vulnerable in our state -veterans, senior citizens and immigrants.  These are the groups scammers target the most.  Our effort to educate citizens is done through generous tax deductible donations to our Foundation, and I thank our Foundation  sponsors and donors for recognizing the importance of assisting our law-abiding citizens in this very worthwhile way."