DANA POINT-  When California Department of Fish and Wildlife (CDFW) wardens received a flood of tips from law-abiding lobster anglers about people grabbing up undersized lobsters from the San Clemente Pier and the Dana Point jetties, they quickly set up a trap of their own to net the poachers.

California Statewide Law Enforcement Association Member (CSLEA) and CDFW Lt. Dave McNair put together a team of wardens and together they formulated a plan to go out undercover and under-the-cover of darkness to catch those who were illegally harvesting undersized lobsters. 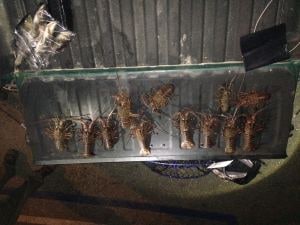 This was no easy task as many people and many vehicles were involved.  It even appears as though the suspects set up a "bait" vehicle, one in which appeared to have been loaded with lobsters, but wasn't, and that CDFW wardens would follow and pull over if they suspected something, which they did. (See Orange County Register story)

The result of their four-day, two-weekend operation?  The wardens issued 17 citations for possession of undersized lobsters, lobster report card violations, possession of undersized kelp and barred sand bass, and failure to have a lobster measuring device in possession.  If convicted, the individuals cited face up to a $1,000 fine and up to six months in jail for each offense.

“Protecting California’s natural resources requires dedication, passion and teamwork,” said CDFW Lt. Dave McNair. “Those anglers who came forward and provided information became an integral part of our team. This was a perfect example of how the CalTIP program works.”

"Any time law enforcement officers go undercover in darkness and in a wilderness type environment in which people are likely in possession of  weapons, or potential weapons, it is a very dangerous situation," said CSLEA President Alan Barcelona. "Lt. McNair lead his team through a successful operation and investigation and is to be commended for his leadership role in following up on tips and helping to put a stop to the poaching in Orange County."

Lobster season opened on October 3, 2015.  It was shortly after the season opener that CDFW began receiving tips to CalTIP.  CalTIP is a confidential secret witness program that encourages the public to provide wildlife officers with factual information leading to the arrest of poachers and polluters. The CalTIP number, (888) 334-2258, is printed on the back of every hunting and fishing license. Tips can also be relayed by text to tip411, which allows the public to text message an anonymous tip to wildlife officers and lets the officers respond back creating an anonymous two-way conversation. Anyone with a cell phone may send an anonymous tip to CDFW by texting “CALTIP”, followed by a space and the message, to 847411 (tip411). There is also an app for smartphones that works similarly. For more information on the program and how to download the new CalTIP app, visit www.wildlife.ca.gov/enforcement/caltip.