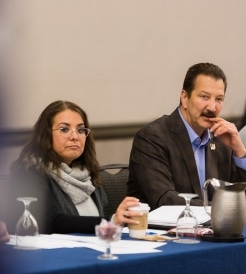 "This was an informative meeting in which we laid the groundwork for a productive and protective 2016," said California FOP President Roger Mayberry.  "We received updates from all our lodge trustees and made decisions on how to best tackle the issues that our members are currently facing and will likely face throughout the year."

During the course of the six-hour meeting, the lodge trustees received presentations from Capitol Advocacy Legislative Advocate Shane LaVigne regarding last year's legislative session and the current one now in progress.  LaVigne updated the trustees on how bills proceed through the state assembly and senate and bills that are currently being introduced that California FOP might consider writing letters of support or opposition for.

"It is vital that we are all in touch with what's taking place at the Capitol," stressed California FOP Legislative Chair and CSLEA FOP Lodge 77 President Alan Barcelona.

State lodge leaders also heard from Political Consultant Peter Mitchell.  Mitchell updated the board on candidates up for election, candidates seeking endorsements and the importance of California Fraternal Order of Police helping to elect candidates who understand the issues that are impacting  public safety and law enforcement officers.  The lodge leaders were reminded, simply because the pension initiatives have been pulled and won't appear on the 2016 ballot, does not mean that members should stop contributing  to Political Action Committee (PAC) funds.  Pension initiatives will likely return in 2018.  "Let's be ready," the lodge leaders were told.

Another item discussed at the board meeting involved media, public relations and providing the public with a look at what California Fraternal Order of Police members do on a daily basis via the California FOP website, facebook and twitter.  The leaders also discussed the importance of addressing critical incidents with the public even if their departments are lagging in a response.

"No comment is not acceptable," said President Mayberry.  "Our members deserve our support and the public deserves some type of conversation regarding the incident."

"Our lodge trustees are committed to the improvement of public safety and law enforcement," said Mayberry. "This is an active, can-do group of lodge leaders and we have our agenda set for 2016."

"I am proud to be at this table with so many fine law enforcement officers, active and retired, as we strive for the very best for our members," said Barcelona.  "California FOP is committed to growing stronger for our members and addressing their needs and concerns."