CSLEA Stands With Assemblymember Cooper in Fight Against Human Traffickers

Suspects' cell phones are key to investigations, but law enforcement can't access data, even with a warrant 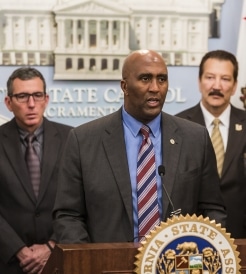 SACRAMENTO - It is called "full-disk encryption" or FDE and it stands between law enforcement and successful investigations and prosecutions.  FDE is the new operating systems that cell phone manufacturers  began using in 2014.  The only way to access data stored on smart phones or tablets using FDE is by using the cell phone user's pass code.  Sometimes law enforcement officers gain a suspect's permission to search data and obtain the pass code, but more often than not, the pass code remains secret and investigators lose out on possible evidence that could lead to the arrest and successful prosecution of the suspect.

One might think investigators could obtain a warrant and the problem would be solved, but that's not the case.

"You can get a search warrant to go into somebody's house," said Assemblymember Jim Cooper (D-Elk Grove).  "As a narcotics officer I've had someone  secrete narcotics in their body cavity and a judge wrote a warrant for that.  So you can get a warrant for pretty much anything and everything, but not for a phone or an ipad?  That's just mind boggling."

On January 20, 2015, Cooper announced the introduction of Assembly Bill 1681, human trafficking evidentiary access legislation.  AB1681 would assist law enforcement to investigate and prosecute suspected criminals and criminal organizations that are involved in human trafficking and other serious crimes.  AB1681 would impose a civil penalty upon any manufacturer, seller, or leaser of specified operating  systems for smart phones that use a "default" system that block the manufacturer, seller or leaser from complying with a search warrant issued by a judge.

"Obtaining cell phone and tablet data is a critical investigative tool," said California Statewide Law Enforcement Association (CSLEA) Fraternal Order of Police (FOP) Lodge 77 President Alan Barcelona.  "It is appalling that law enforcement can't access this key information that can put a stop to violent individuals who force young children and young adults into human trafficking, as well as other criminals.  We stand beside Assemblymember Cooper in his push to get AB 1681 passed.  This is not an invasion of privacy, this would require a court order."

"Like a lawyer uses his words and a carpenter uses his tools, a pimp uses his phone," said Luna.  "To traffic, to exploit and sell our children.  It's rare to have a human trafficking case where a phone is not involved."

For more information on AB 1681