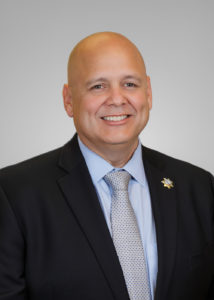 Kenneth Ehrman began his law enforcement career in 1994 as a Correctional Officer with the California Department of Corrections. Five years later, he transferred to the Department of Motor Vehicles as an Investigator, where he remains today. While at DMV, Kenneth has served in variety of assignments including Internal Affairs, Background Investigations, Fraudulent Document Detection Trainer, Defensive Tactics instructor and Verbal Judo Instructor.

Kenneth received a Bachelor of Science degree from Sacramento State University in Criminal Justice and a Master’s of Science degree from the University of San Diego. He attended Leadership Development Academy at the University of California at Davis. He completed the FBI Instructor Development Course and is a P.O.S.T. Certified Instructor in multiple subjects. Kenneth is currently working on his Doctorate of Public Administration and serves as a Policing Fellow at the National Police Foundation.

Kenneth also serves as President of the Association of Motor Vehicle Investigators of California (AMVIC) and the Unit A Vice President of CSLEA. In addition, he serves as the Chairman of the CSLEA Public Safety Foundation and Legal Defense Fund.