HUNTINGTON BEACH - On January 6, 2016,   the Resource Protection Peace Officers Association (RPPOA) Board of Directors met at the California Statewide Law Enforcement Association (CSLEA) office in Huntington Beach for its first board meeting of 2016.

"It's important for us to outline our objectives and goals for 2016 and to prepare for the very important process of  negotiations with the state which begin in the spring," said RPPOA President Matt Yarbrough. "We definitely want RPPOA members to be as involved in this process as they can be and to  submit contract proposals for consideration." 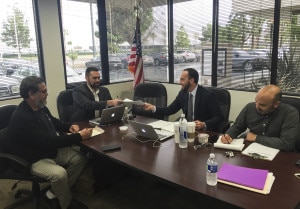 To submit a contract proposal, please use this form (click here) and send it to CSLEA Headquarters, attention Kasey Clark, Chief Counsel/General Manager, 2029 H Street, Sacramento, CA 95811. Completed forms may also be sent via email to KClark@cslea.com or facsimile to (916) 889-8289.

"Any suggestions for improvements and negotiation should be submitted now," said Yarbrough.  "We must discuss and research the proposals that are submitted by members before going to the bargaining table with the state."