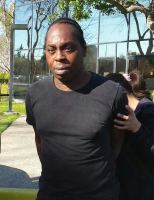 Curry allegedly stole the identity of multiple individuals, impersonated them and attempted to withdraw funds from their annuities. Curry allegedly used the stolen identity of an individual to submit a change of address on an annuity investment and attempted to withdraw $35,000 from two annuities owned by the victim. The victim's insurance agent noted the unauthorized change of address, flagged it as suspicious and reported it to the Department of Insurance.

"This crime was uncovered by an alert consumer and their insurance agent who recognized unauthorized activity on the consumer's annuity investment," said Insurance Commissioner Dave Jones. "Consumers should pay close attention to any mail they receive from their insurance company or financial institutions alerting them of attempts to access their information or make changes to their records."

While investigating Curry, investigators found a counterfeit driver's license, Social Security card and checks belonging to a previously unidentified victim, as well as dozens of stolen financial portfolios and personal information of other victims. Curry allegedly planned to use or was using these individuals' financial information to steal money from their investments.

"It's appalling to me how low criminals will go, stealing the identities of hardworking people only to victimize them even further by taking away money they are counting on," said California Statewide Law Enforcement Association (CSLEA) President Alan Barcelona.  "With consumer and agent diligence and CDI detectives pursuing those who commit these crimes, hopefully we can begin to put a stop to this, but this type of crime is so incredibly widespread."

The grand theft and identity theft Curry is charged with allegedly occurred between August 14, 2015 and September 20, 2015.  Curry is currently on federal probation for wire fraud and possession of unauthorized devices used to commit identity theft.