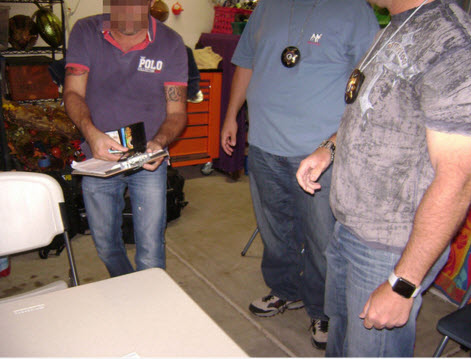 SACRAMENTO – Investigators with the California Contractors State License Board caught up with 83 people suspected of contracting without a license during a six-city undercover sting April 5-7, 2016.  The annual April operation is dubbed CSLB's "Spring Blitz," but don't let the season fool you, investigators set up stings throughout the state throughout the entire year in an effort to curb illegal contracting.

"Unlicensed contracting  is such a widespread issue in California and it puts consumers at risk," said California Statewide Law Enforcement Association President Alan Barcelona.  "In addition, it is unfair to contractors who have taken tests and gone through background checks to be licensed by the state."

Investigators  had the most success rounding up unlicensed contractors in Bakersfield, where 21 people  were cited for illegal contracting during the two-day sting there April 5-6. CSLB’s operation in Santa Ana netted the next highest number of citations with 18 people cited. Fifteen people were cited in the Salinas sting on April 6-7.

“We find that sting operations are the most effective way to gauge the level of illegal contracting in an area, and send a message to those contracting without a license,” said CSLB Registrar Cindi Christenson.   "Unfortunately, despite our year-round efforts to deter this illegal activity, unlicensed contractors still think they can beat the system and do work that they’re not qualified for.”

State law requires a contractor license for construction or home repair work that totals $500 or more for materials and/or labor.

All 83 people  were given Notices to Appear in their respective superior courts for contracting without a license. The penalty for a first conviction is up to six months in jail and/or a fine of up to $5,000.

In addition, 69 were cited on a charge of illegal advertising. State law requires contractors to place their license number in all print, broadcast, and online advertisements. Those without a license can advertise to perform jobs valued at less than $500, but the ad must state that they are not a licensed contractor. Violators can be fined $700 to $1,000.

In Bakersfield, 11 of the 21 cited did not have workers’ compensation insurance which puts workers at risk of not being covered if they are injured and exposes homeowners to liability for on-site injuries.

Three of the suspects had warrants for their arrests involving, traffic, child support or contracting without a license.