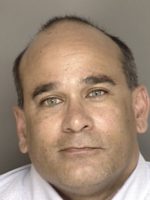 MONTEREY- On May 17, 2016, Salinas physician, Steven Mangar, 46,  was arrested and charged with 37 felony offenses following an investigation that was conducted jointly by the Monterey County District Attorney's Office, the California Department of Insurance, and the California Medical Board.

The charges consist of submitting fraudulent health insurance claims and billings, furnishing drugs to an addict, and unlawful prescribing of medicine to patients who did not have the condition for which it was intended.  In addition, Mangar is charged with enhancements alleging his felonious conduct resulted in him fraudulently taking more than $500,000.

"Multi-faceted insurance fraud schemes are exceedingly sophisticated," said District Attorney Dean Flippo. “This complex investigation required review of tens of thousands of pieces of evidence. The review was painstaking and took approximately two years to complete. The investigators on this case have worked countless hours conducting numerous interviews of affected patients and witnesses, and maintained diligent investigative efforts, which resulted in the meticulous collection of evidence.”

"The abuse of prescription pain medications is huge in this country," said California Statewide Law Enforcement Association (CSLEA) President Alan Barcelona.  "State investigators are dealing with more and more cases like this and the end result is often prison time for the offending medical professional."

If convicted, Mangar faces a maximum sentence of 44 years, 8 months in state prison.