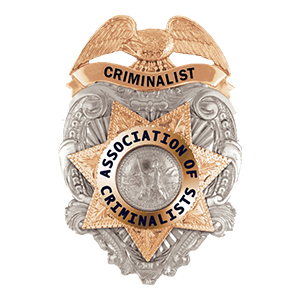 RIVERSIDE - Those interested in the role that crime labs, and those who work in them, play in solving crimes, finding suspects, and identifying  victims got a chance to hear from California Department of Justice (DOJ) Criminalist Melanie Velasco  on Thursday, July 20, 2016.  Velasco, a member of the California Statewide Law Enforcement Association (CSLEA)  and the Association of Criminalists-DOJ (AC-DOJ), was the featured speaker at the University of California Riverside Extension's "Evening with the Experts."

"The lecture provided an overview of criminalistics, discussed the organization and capabilities of a crime lab, and delved into the roles of Biology and DNA criminalists," said Velasco.  "Aspects of evidence collection, biology screening techniques, DNA analysis, and CODIS were presented."

DOJ criminalists are  serious,  successful crime fighters and crime solvers who just recently lead Rocklin police to a robbery suspect,  identified a massage parlor rape suspect in Santa Barbara County,  identified a Jane Doe in Southern California 46 years after her body was found,  and lead Stockton police to the suspected killer of an 84 year old woman.

“These are public safety employees.  They may not carry guns, they may not have badges, but what they do is just as important,” said Senior Criminalist and President of AC-DOJ  John Miller.  “There are cops, there are courts, there are correctional institutions and there are crime labs.  We are a vital part of law enforcement and criminal justice.”

Velasco's  lecture at UCR Extension was free and opened to the public.  The audience consisted of more than 30 past and current students from UC Riverside Extension’s Crime Scene Investigation certification program, individuals currently working in law enforcement, and members of the community with an interest in Forensic Biology and DNA.

"I discussed  a case example, emphasizing biology screening methods, DNA analysis, the role of CODIS, the capture of a suspect, and the progression of the case through the court system," said Velasco.  "All participants had the opportunity to perform a blood screening test on a t-shirt and were able to experience the role of a criminalist firsthand."

Velasco has worked as a criminalist at the DOJ lab in Riverside for nearly 6 years.