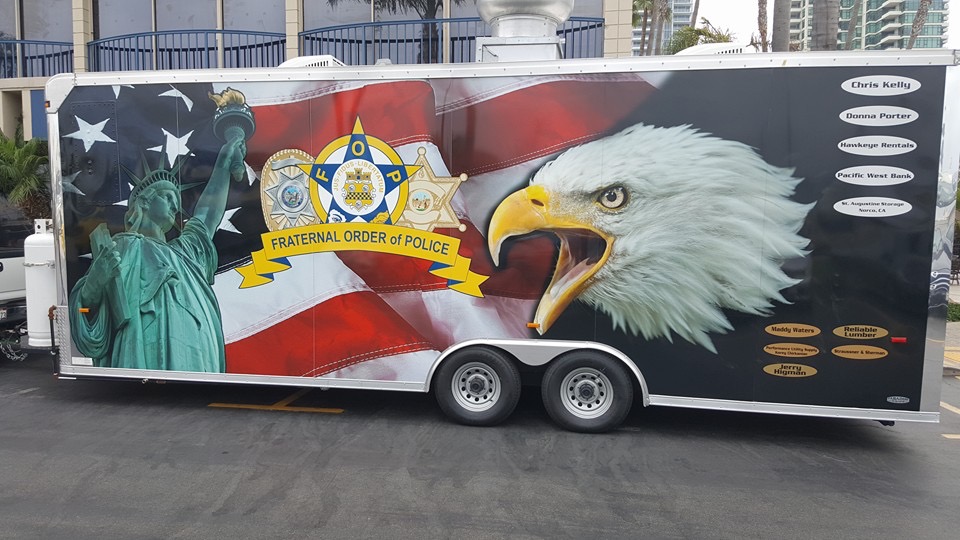 SAN DIEGO – The California Fraternal Order of Police concluded its 2016 Biennial State Conference on Tuesday, August 30th.  The conference was hosted by Los Angeles County Lodge 1 and included board meetings, state lodge business, updates, elections, classes, awards, and a very special visit from California FOP Member - San Diego Police Officer Wade Irwin who was shot in the neck in July when a man opened fire on him and his partner.  His partner was killed in the attack. 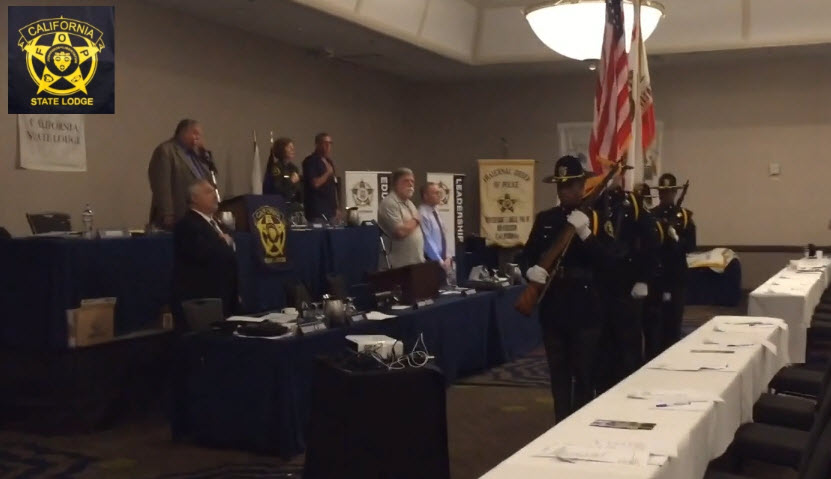 The main portion of the conference opened with the Posting of Colors by the Orange County Sheriff’s Department, the Pledge of Allegiance, an opening prayer and a moment of silence for Veterans and law enforcement officers who bravely serve or served our country, some losing their lives in the line of duty.

Orange County Sheriff Sandy Hutchenson welcomed delegates and guests and spoke about the current climate, the “war on criminal justice and the war on cops.”

“I believe 99.9% of our cops are out there every day doing the hard and often thankless job, keeping the public safe,” Sheriff Hutchenson said.  “They will continue to do their job, because they are dedicated to their mission.”

Hutchenson called for a mental health system that works and told those in attendance that the law enforcement uniform they wear represents government and when they enter challenged communities, they represent everything that is wrong with government. 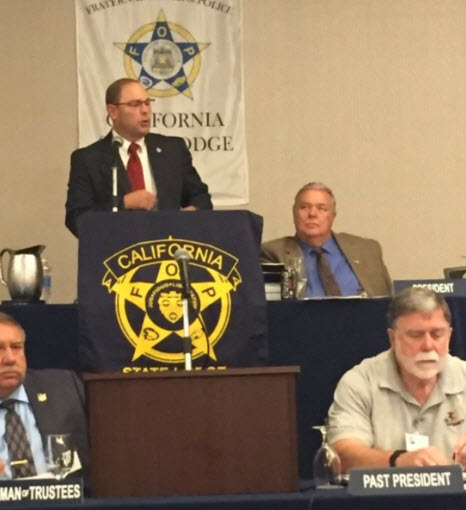 Canterbury thanked California FOP President Roger Mayberry for his work in California and as Sgt. Of Arms on the National level.  “He is a God-sent to me on this board,” said Canterbury.

National FOP Vice President Jay McDonald spoke about the need to bring into the spotlight, the honest and heroic work that law enforcement officers do each and every day.  “We as an organization need to stand up and tell the truth about what’s going on in the streets,” said McDonald.   He encouraged members to use social media, including the FOP’s Facebook page and Twitter to receive updates and to share the lifesaving work that officers do across the country.

“We also spoke to our members about the need to be there for one another, emotionally and financially,” said California FOP President Roger Mayberry.  “On July 28th, one of our members, San Diego Police Officer Wade Irwin was critically wounded when he was shot in the neck.  FOP is beside him in his long road to recovery.  We asked California local lodges to pledge money to help him and his family.  He is a true hero for his actions the night he and his partner came under attack.  As he was on the ground bleeding, his partner dying, he fired shots at his attacker, injuring him, saving responding officers from being shot at.”

Mayberry thanked California FOP Lodge 10 President Kevin McQuillen for taking the lead in getting support to Officer Irwin and his family and suggested that Officer Irwin might attend the conference for a few minutes on August 30th to say, “thank you.”

Officer Irwin arrived the next day to a rousing, standing ovation.  He and his wife walked through the hero’s welcome and up to a podium where he spoke briefly about his duties as a gang officer and being shot.  It was evident that he was physically and emotionally exhausted and will need many months to recover. 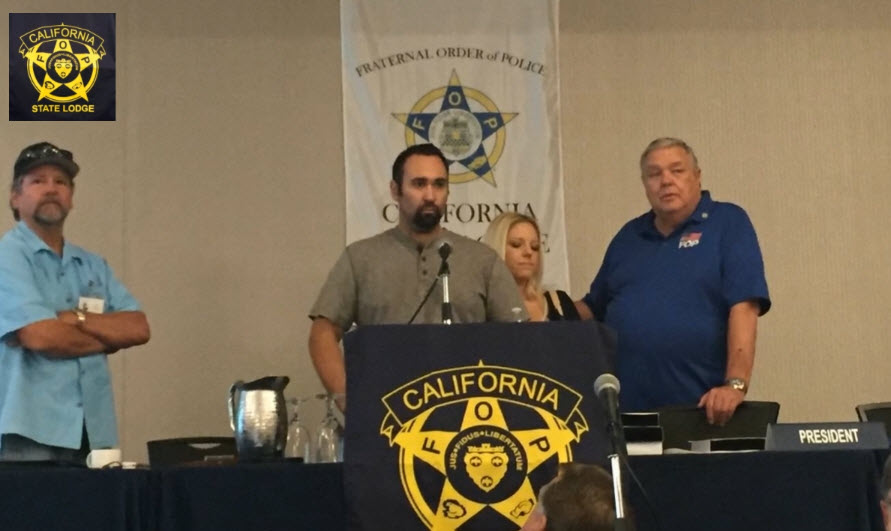 “I’m originally from Salinas, California,” Irwin told the group, “My father was a Salinas police officer for 28 years, so, definitely this is in my blood, this is the only job I’ve ever wanted to do.”

Irwin said he spent 25 days in the hospital and only returned home a week and a-half ago.  He said he is looking forward to going back to work as soon as he heals.    “I want to thank everyone for their support,” Irwin said tearfully.  “For what you guys are doing for everything that you are doing for my family.”   Every officer in attendance jumped to his/her feet and applauded and shouted support for Officer Irwin.  Irwin was presented with several checks with the promise of more financial support on its way.

“This was a very emotional time for all of us,” said Mayberry.  “We will stand by Officer Irwin and his family and be at the ready for him.”

Other items of business included a legislative and political report from Legislative Advocate Shane LaVigne and Political Consultant Peter Mitchell, and a membership and financial update.

California FOP President Roger Mayberry announced his candidacy for National FOP Secretary and received the support of the California delegation.

“I sincerely thank Mark Nichols for his service to FOP,” said Mayberry.  “He has been a tremendous help to our board and to the California Fraternal Order of Police.  He remains President of his local lodge and will continue to serve.”

One of the classes presented to FOP membership was a presentation by Jason Lehman on “Why’d You Stop Me?”  Members also learned about FOP legal defense and other issues they encounter as working and retired officers. 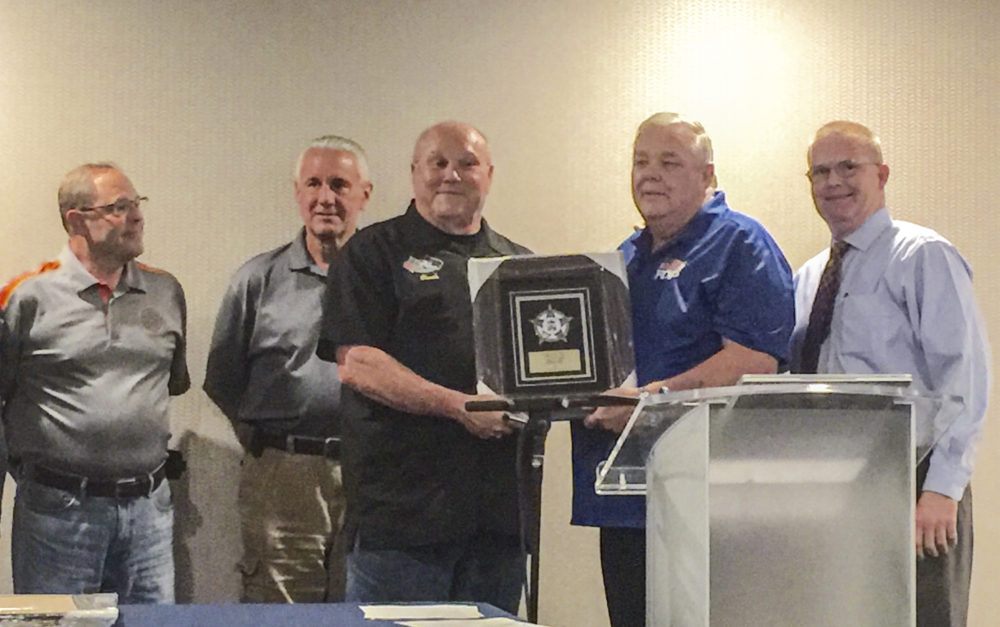 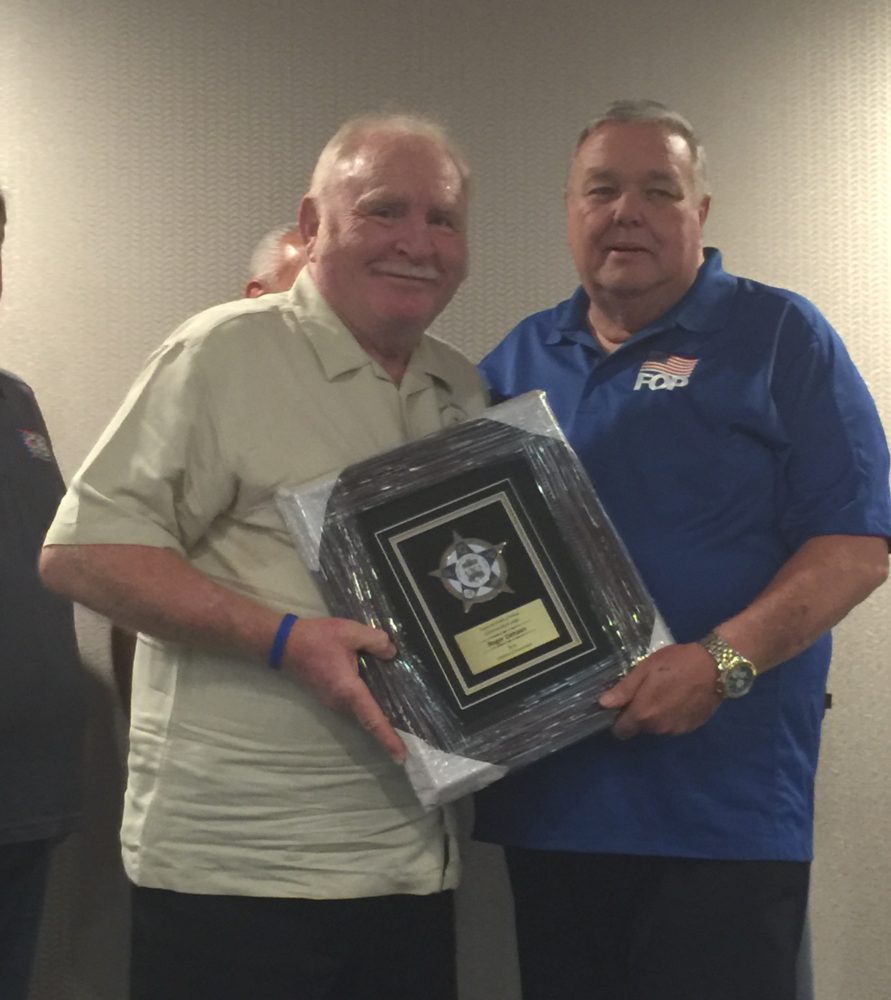