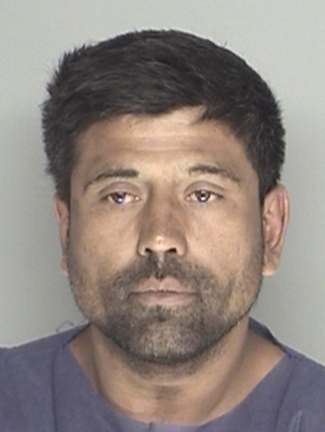 GOLETA- On the morning of August 16, 2016,  a California Statewide Law Enforcement Association (CSLEA) member and State Parks Peace Officer-Lifeguard  conducted a welfare check after witnessing a man sleeping on the bridge at Vista Point near Gaviota State Park.  He made contact with Fitim Burgazi, 38, of Santa Barbara.  Burgazi told the officer that he had a weapon and intended to harm himself.  Burgazi refused to follow the officer's commands and  fled on foot along the railroad tracks.

Officer Von Der Lieth put out a description of Burgazi and his direction of travel.  When Santa Barbara County Sheriff's deputies arrived, they confirmed Burgazi's identity and determined Burgazi had a felony warrant for his arrest for escaping a custody facility. In addition, Burgazi was wanted for violating terms of his felony probation.

Deputies, with the assistance of Probation, State Parks, and CHP, set up a perimeter to search for Burgazi and found him hiding in some bushes along the bluffs.  When Burgazi was found he was in possession of a knife and stated he intended to kill himself.  Law enforcement officers negotiated with Burgazi for two hours and conversed with Burgazi’s spouse who believed Burgazi intended to force law enforcement to shoot him.

When Burgazi placed a knife to his throat and began a cutting motion,  deputies feared for his safety and his life, and deployed a pyrotechnic distraction device and “bean bag” projectiles. This action stopped Burgazi from harming himself and within a few minutes, Burgazi surrendered.

Burgazi was transported to a local hospital for treatment and later booked into custody at the Santa Barbara Jail.

"The initial contact with this subject by our CSLEA member and State Parks Peace Officer-Lifeguard, not only resulted in the arrest of an escapee, but kept the subject from harming himself and others," said CSLEA President Alan Barcelona.  "This officer was clearly in harm's way when he made contact with the subject and may have prevented visitors to the  area from encountering him.  That's public safety at work."