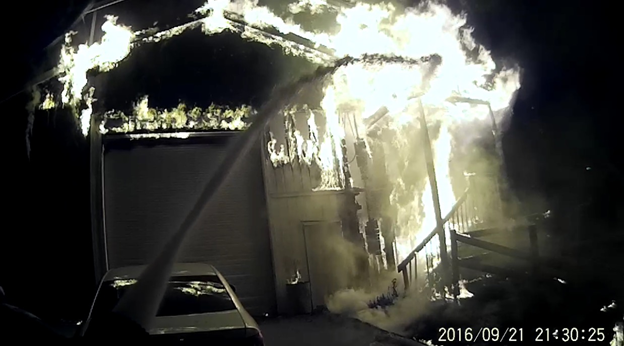 ATASCADERO - Do firefighters save lives?  You bet they do.  As you look at the picture above, imagine the rescue taking place around back.  When Atascadero State Hospital (ASH) firefighters arrived at this scene to assist Atascadero City Fire, firefighters were placing  a ladder to a second story window to rescue a man trapped inside his burning two-story home.

The fire broke out September 21, 2016 shortly before 9:30 p.m.  Off-duty ASH Firefighter Bryan Arebalo ran to the scene from his nearby home and helped city firefighters pull supply and attack lines.  Shortly after, on-duty ASH Firefighters Andrew Neely and Faith Jewell arrived to assist in the firefight.  All three are California Statewide Law Enforcement Association (CSLEA) members.

"Our firefighters stationed at California state hospitals and on various state grounds, routinely assist local fire departments with their emergencies," said CSLEA President Alan Barcelona.  "These are a unique group of firefighter-peace officers who respond to vehicle accidents, fires and medical emergencies to name a few.  Firefighters are humble, they'll save someone's life and tell you it's just what they do, it's their job."

"When I arrived I heard someone yell 'there's still someone in there,'" said Arebalo.  "I never saw the guy, I was in the front."

According to reports, the man trapped in the structure, which was a barn on the first floor with living quarters above, remained on the phone with dispatchers  who instructed him to stay next to a window as firefighters arrived.  He was treated for minor smoke inhalation.  It took 30 minutes to extinguish the flames.

Firefighters from Atascadero Fire, ASH, CAL FIRE, and Templeton responded.  The fire, which appeared to have started outside of the home, is under investigation.

(Photo above is from Atascadero Firefighter Zack Jackson's helmet cam)