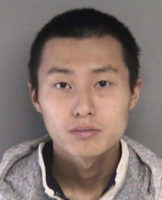 SANTA BARBARA- A man accused of raping and beating a fellow student at UC  Santa Barbara in February 2014, will face trial on charges of forcible rape, torture and great bodily injury.  The decision that there was enough evidence to try Daniel Chen, 21, was made by Santa Barbara Superior Court Judge Pauline Maxwell on October 4, 2016, following a preliminary hearing in which at least five people  testified including California Department of Justice (DOJ) Senior Criminalist Carla Levi.

Chen was arrested for the crime in February 2016 after a felony drug arrest in Alameda County in which his DNA was collected and entered into a database.  His DNA matched DNA collected from evidence in the 2014 rape of a 19-year-old UC Santa Barbara student.

The victim was severely beaten and raped on campus.  Those testifying in the preliminary trial included law enforcement officers who responded to her 911 call, a hospital nurse and DOJ Senior Criminalist Carla Levi.  First responders told the court, the victim's injuries were the worst they had ever seen.

"Forensic Science is the long arm of the law," said John Miller, president of the Association of Criminalists-DOJ.  " “No matter where a criminal may go, if they leave something biological at the crime scene, the odds are good that we can match it to a profile in the database.”

"It is horrible to think about what this young woman went through and is probably still going through," said California Statewide Law Enforcement Association (CSLEA) President Alan Barcelona.   "DOJ criminalists are true heroes and contributors to public safety and criminal justice.  It is their scientific and highly regarded work in a lab that leads to the arrest, prosecution and sentencing of many criminals who would have otherwise gone unidentified and never arrested."