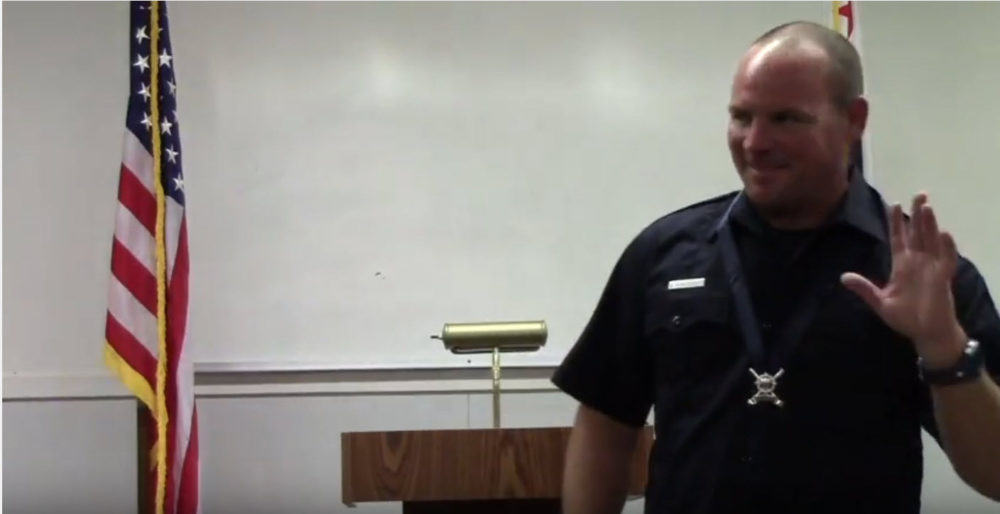 BODEGA – Congratulations to California Statewide Law Enforcement Association (CSLEA) Member Aaron Pendergraft, California State Lifeguard II, for receiving the United States Lifesaving Association Medal of Valor for a heroic rescue along the Sonoma Coast on February 26, 2016.  A young mother and her daughter are alive today because of his quick thinking, quick action, skills, and bravery. He was presented the medal in Bodega on November 15, 2016.

“To look at the video of Lifeguard Pendergraft in the cold ocean water, with no wet suit, not only holding the two victims afloat, but taking them further from shore where the water was calmer, gives you a sense of the danger our California State Lifeguards face,” said CSLEA President Alan Barcelona.  “He stayed in the water with the two victims until a helicopter crew could pluck them from the water, one by one, and only then was Pendergraft airlifted out.”

Pendergraft, a 16-year veteran saw the emergency unfold from his truck.  A family of five playing at water’s edge when a powerful wave forced them off their feet, underwater, and away from shore.  Three made it out on their own.  Pendergraft radioed for additional help, and knowing there was no time for a wet suit, he rushed out to the mother and daughter.  His expertise with north coast waves told him they would not survive the rough surf on the way back in to shore.   He chose to pull the mother and daughter further out into the water where it was calmer and wait for a helicopter.

California Peace Officer Lifeguard and CSLEA Member Ed Vodrazka told those at the award ceremony that there has always been an alarming number of drownings along the Sonoma Coast due to the biting cold water, rocky coastline, massive surf, and the absence of a sense of danger by beachgoers.  “The Sonoma coast state lifeguards have been awarded the highest percentage of the medals of valor of any lifeguard agency in the world, “ said Vodrazka

Penergraft was in 49-degree water for 30 minutes before he was pulled from the water by a helicopter.  He was taken to a hospital to be checked for hypothermia and returned to work for his next scheduled shift.