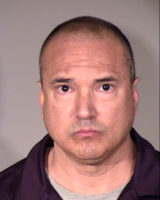 THOUSAND OAKS -  On December 22, 2016, the Ventura County Interagency Pharmaceutical Crimes Unit (which includes investigators from the California Department of Consumer Affairs Division of Investigation Health Quality Investigation and the California Department of Health Care Services) and the Ventura Police Department concluded a joint investigation into the sales of pharmaceutical drugs on the streets of Oxnard and Ventura with the arrest of Dr. Paul Duran for drug sales.

The investigation, which began in February 2016, revealed that pills being sold on the street were being sourced from a doctor’s office in Thousand Oaks.  Investigators identified Dr. Paul Duran as the suspected source of supply and over the next several months, numerous undercover purchases were made from Dr. Duran at his office.

“When state investigators team with local law enforcement, much can be accomplished,” said California Statewide Law Enforcement Association (CSLEA) President Alan Barcelona.  “At least one of our CSLEA members is currently assigned to the Ventura County Interagency Pharmaceutical Crimes Unit and I commend the work that he has done assisting with the fight against street drugs and the illicit sales of prescription drugs.”

According to the Ventura County Sheriff’s Office, Dr. Duran would write prescriptions for opioids such as oxycodone and hydrocodone, benzodiazepines such as Alprazolam (Xanax), and stimulants like dextroamphetamine / amphetamine (Adderall) with no examination or any semblance of the practice of medicine. Investigators also learned that Dr. Duran was on probation with the California Medical Board for similar activity in the past.

Detectives served a search warrant at Dr. Duran’s office and at his home in West Hills and report that evidence related to the illicit prescribing of medication was found at both locations. Dr. Duran surrendered his DEA registration suspending his ability to write controlled substance prescriptions and was booked into the Ventura County Jail.

The primary mission of the task force is combatting the transfer of legal prescription medication to the illegal market. The California Department of Insurance and the Ventura County Narcotics Task Force assisted in this investigation.