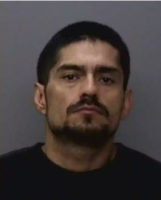 BURNEY- On January 19, 2017, Shasta County Sheriff’s detectives arrested Juan Manuel Venegas, 39, for the murder of David Wicks, a Johnson Park gas station attendant who died after being sprayed with a flammable liquid and set on fire.

The arrest followed a month-long investigation which included pieces of evidence that were sent to the California Department of Justice Bureau of Forensic Services for DNA analysis.  As a result of DNA analysis performed by DOJ criminalists, a suspect DNA profile was identified as belonging to Venegas. Venegas is a long-time resident of the Burney, Johnson Park and the Fall River Mills area of Shasta County.

“This is a particularly horrible, heinous and seemingly random crime,” said Association of Criminalists-DOJ President John Miller.   “Fortunately, our criminalists were able to get a usable DNA profile from the evidence.”

The crime occurred on December 21, 2016 at approximately 7:00 p.m.  Store surveillance showed a suspect wearing a yellow suit riding up to, and away from, the Rocky Ledge Shell station on a black beach cruiser style bicycle.   The suspect set fire to Wicks with a flammable liquid.

In the days following the homicide, deputies and detectives with the Shasta County Sheriff’s Office, along with other allied agencies and volunteers conducted follow up and searches looking for evidence. During this time, several pieces of evidence were located in Johnson Park that detectives believed were related to the suspect. The items of evidence sent to the California Department of Justice.

According to the Shasta County Sheriff’s Office, the investigation is still on going and active as detectives continue to collect evidence and determine a motive.

“Our thoughts continue to be with the victim’s family,” said California Statewide Law Enforcement Association (CSLEA) President Alan Barcelona.  “Nothing will bring David Wicks back to his loved ones, however, the work done by DOJ criminalists and Shasta County detectives, can perhaps help them as they endure this terrible time of loss.”