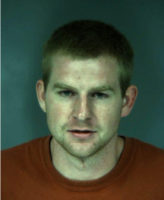 Schmidt started a fire in a Eureka home on November 3, 2015. It appeared the home had been vandalized prior to the fire.  No one was injured, but a family dog could not escape and died in the home.  Evidence included a gas can with blood on it inside a bedroom and blood on the exterior of the house. During the investigation, Schmidt arrived on the scene with bandages and cuts on his hands. A neighbor identified Schmidt as the person seen leaving the residence near the time of the fire. Firefighters detained Schmidt until law enforcement arrived.

Humboldt County Sheriff’s Office Evidence Technician Andy Campbell acquired blood samples from the gas can, outside the residence, and from Schmidt. California Department of Justice (DOJ) criminalists determined that it was Schmidt’s blood on the gas can and outside the house.

“We have to keep things in perspective. Thank goodness no human beings were killed in this arson. But the loss of a family pet as well as a home is devastating in its own right, especially if it was done deliberately,” said Association of Criminalists-Department of Justice (AC-DOJ) President John Miller.  “Our criminalists did a great job in helping to identify the source of the blood evidence.”

The Humboldt County District Attorney’s Office thanked those who testified in the case, including the victims, neighbors, and Melgoza.

Schmidt is scheduled to be sentenced on February 23, 2017. He faces a maximum sentence of eight  years in state prison.