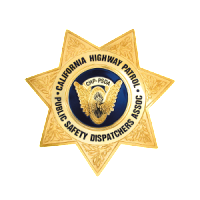 I have been a public safety dispatcher with CHP for more than 23 years.

I started dispatching at a private ambulance service in 1990, and while working there we had a part-time weekend dispatcher who worked for CHP (Nancy  Layton).  We worked together for a couple of years on the weekends, and she told me I should apply with CHP, she thought I'd be a good dispatcher and could make a career out of the job.

After a couple of bumps in the hiring road, I tested and interviewed.  I was hired (thanks Jan Rhodes!), and scheduled to start in January of 1993.  I started my career with CHP on January 18, 1993, the day after the Northridge earthquake.

Training was rough.  I won't kid anyone, it was intense.  There were times I thought that maybe it was too much.  But I had good trainers and coworkers who cared enough to encourage me and I stuck with it.

After a year and a few months at LACC, I transferred to Stockton CC.  The change between a large center and a small one was amazing.  I went from CAD to CARDS!!  What a change.  I got to work one-on-one with experienced senior dispatchers and officers.  I learned so much. I had as much of a learning curve as when I had started the job.  It was worth it.  I got to work with great people, and even though I wasn't doing the training, I was able to help trainees and have input into how they were being trained.

After working in Stockton for nine years, I transferred to Merced CC.  Again, I had a learning curve. Geography can be difficult!  But, again I stuck it out and was privileged to work with a lot of good people.  I found out that you never stop learning with this job.  I again got to work with good people and had lots of help adjusting to the new areas and different procedures for the different offices.

After working in Merced for 10 years, I decided I wanted to see another part of the state and transferred to Humboldt CC, where I’ll work until retirement.  It is a wonderful area and has great people to work with.  Even though HCC isn't as busy as LACC, it has its own challenges.

No matter where you work, dispatching with CHP is never boring (for long lol!).

If there is only one think I could say about doing the job, it’s YOU ARE MAKING A DIFFERENCE!  I was helped in the beginning and had people reinforce this for me.  Maybe this will help someone who is struggling, maybe not, but you should always know, you are making a difference.

DURING NATIONAL PUBLIC SAFETY TELECOMMUNICATORS WEEK, CSLEA IS SHINING THE SPOTLIGHT ON ITS PUBLIC SAFETY DISPATCHERS AND COMMUNICATIONS OPERATORS!  THESE BEHIND-THE-SCENES FIRST RESPONDERS HAVE A VITAL ROLE IN PUBLIC SAFETY