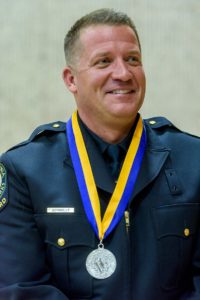 Connolly, a California State Parks Seasonal Lifeguard II, saved the life of a surfer in December 2015 during the biggest storm to hit the Ventura area in 10 years.  Had Connolly not entered the water to help the exhausted surfer, the surfer would have drowned.

“He was exhausted, he couldn’t lift his arms anymore,” said Connolly.  While emergency crews assembled, and evaluated the situation, Connolly dove in.   “I have a lot of experience with big surfs, I know my comfort zone.”  Connolly and the surfer took many waves to the head, and at one point, Connolly became nervous when they went under water for what seemed like a long period of time.  An off-duty lifeguard signaled to Connolly where best to come in, in order to avoid being slammed into rocks and becoming injured.

Connolly was honored along with 21 other state employees who performed heroic acts at a ceremony at the CHP Academy in West Sacramento on May 23, 2017.  The State Medal of Valor is the highest honor the state bestows on its public servants.

“You watch the video of the rescue and you wonder how anyone could survive that kind of pounding,” said CSLEA President Alan Barcelona.  “I am grateful Connolly and the surfer he rescued are alive.  Lifeguard Connolly obviously has great knowledge of the surf’s behavior and is an expert in these types of water rescues, but that surf was treacherous.  He is a true hero and we at CSLEA and CALEE are very proud of him and his service to the State of California.”

Asked if he has ever met with the man whose life he saved, Connolly grinned, “I gave him a big hug and said ‘I’m so stoked you’re okay’ and I never saw him again.”

Connolly is a season lifeguard with California State Parks and has worked as a lifeguard for 16 years.  He is a Spanish instructor at Ventura Community College and a volunteer with the Fillmore Fire Department.