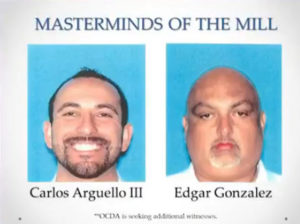 SANTA ANA – On June 5, 2017, Orange County District Attorney Tony Rackaukas announced the first phase of charges filed in a multi-million dollar workers’ compensation insurance referral scheme.  Charges have been filed against 16 people, 10 of them attorneys and six working as “cappers.”  The district attorney reports this is the largest number of attorneys charged in one case in Orange County history.

The charges were filed following a three-year insurance fraud investigation conducted by the Orange County District Attorney’s Office with assistance from the California Department of Insurance.

Carlow Arguello III, 35 of Tustin and Edgar Gonzalez, 50 of Anaheim are the accused masterminds of a scheme that involved more than 33,000 patients and at least $300 million in insurance payouts received.

Arguello is accused of forming an advertising company in 2005 and setting up illegal contracts with as many as 30 attorneys who dealt with workers’ comp and personal injury.  The contracts required the attorneys to use companies owned by Arguello and Gonzalez in exchange for cappers getting the attorneys a minimum number of clients each month.  The cappers targeted the Spanish-speaking community.   The scheme also involved medical providers who allegedly paid for patients recruited by the cappers, then prescribing durable medical equipment and pharmaceutical goods through vendors and referring diagnostic imaging requests to companies chose by the cappers.

“This illegal referral scheme is beyond sinful,” said California Statewide Law Enforcement Association (CSLEA) President Alan Barcelona.  “Professionals in the legal and medical field taxing the worker’s comp program, essentially driving up the cost of workers’ comp insurance which can put businesses in the red and out of business.”

The scheme was busted wide open after PCDA received a tip from a major insurance carrier and initiated an investigation with the California Department of Insurance.

The attorneys charged include:

If convicted, maximum sentences range from 7-25 years and eight months in state prison.

The cappers charged include: