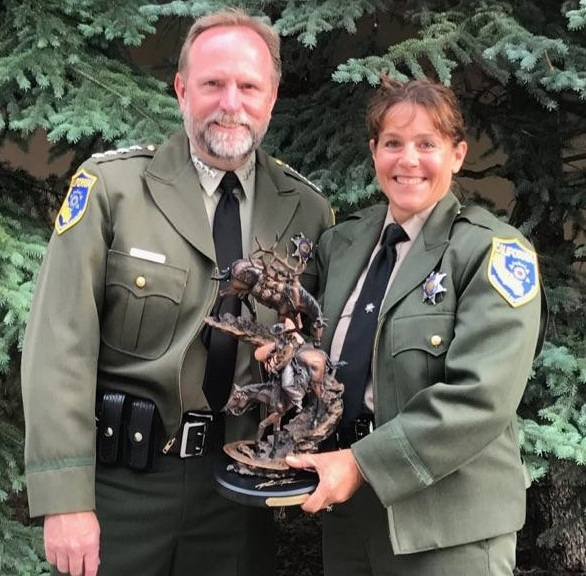 The California Statewide Law Enforcement Association (CSLEA) and its affiliate, Resource Protection Peace Officers Association (RPPOA) congratulates Department of Fish and Wildlife (CDFW) Officer Nicole Kozicki for being selected as the Pogue-Elms Wildlife Law Enforcement Officer of the Year. The award, which was formally presented to her at the Western Association of Fish and Wildlife Agencies (WAFWA) annual conference on July 10, 2017,is considered their highest honor. Kozicki is also the first female recipient of the award.

“How can you not be proud or inspired by CDFW Warden Kozicki?” said CSLEA President Alan Barcelona.  “She has worked passionately on some pretty tough cases to protect California’s natural resources.  Recently CDFW’s Law Enforcement Division named her 2017 Wildlife Officer of the Year.  We are very proud of her decades of work serving California.”

Kozicki has honorably represented CDFW in the San Francisco Bay Area and its communities for 27 years.

“We are very happy to see Wildlife Officer Kozicki receive the Pogue-Elms award for her extraordinary dedication to the protection of California’s natural resources,” said Assistant Chief Steve Riske, who supervises Kozicki. “Her tireless investigations of poaching, pollution, and environmental crimes are an example to her fellow wildlife officers in California and to others throughout the country. Her reputation brings great credit to herself, CDFW and California.”

Kozicki’s ability to handle complex, large-scale investigations — many of which have involved harm to threatened and endangered species — has earned her a reputation as an expert in the field of environmental crimes. Throughout her career, Kozicki has led hundreds of stream alteration and pollution cases to successful prosecution. Her tireless pursuit of the truth has resulted in hundreds of acres of mitigated lands being preserved in perpetuity and has generated millions of dollars in fines. Fellow wildlife officers as well as investigators from local, state and federal agencies often seek her investigation expertise.

Among the greatest of Kozicki’s accomplishments is her leadership of an investigation related to illegal development practices that threatened two endangered species – the California tiger salamander and the red-legged frog – at Dublin Ranch in Alameda County. Conducted jointly with the U.S. Fish and Wildlife Service and the Federal Bureau of Investigation, the three-year investigation uncovered numerous violations of state and federal law, including egregious grading and illegal stream alterations, habitat destruction and falsification of permitting documents. Kozicki provided testimony in state court for two full weeks. The developer eventually pled no contest to charges of submitting fraudulent documents in an attempt to avoid development requirements.  The terms of the plea agreement between the developer, the California Attorney General’s Office and CDFW included almost $1.1 million in fines and restitution, preservation of 107 acres of land in Contra Costa County (known as the Brown Ranch) in a conservation easement and $300,000 put into an account to manage the property.

WAFWA represents 23 states and Canadian provinces, spanning from Alaska to Texas and Hawaii to Saskatchewan. Idaho Department of Fish and Game Wildlife Officers Bill Pogue and Conley Elms were killed in the line of duty in 1981, during a poaching investigation. WAFWA created the award in their honor.