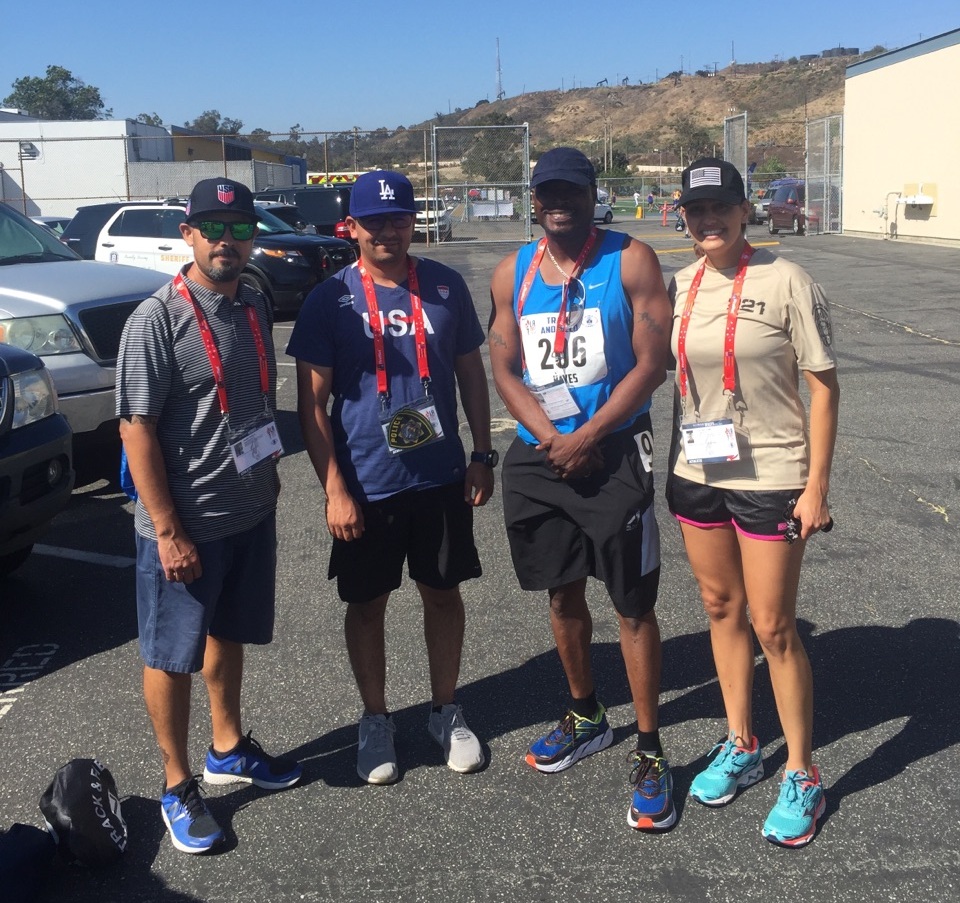 LOS ANGELES – On August 7-16, 2017, four investigators from the Metropolitan State Hospital (MSH) competed in the 2017 World Police and Fire Games.

The following is a report back from CSLEA, CACI Member Investigator Darryl Hayes

“This was my first time competing in the World Police and Fire Games.  I have competed in the United States Police and Fire Games on multiple occasions.  I have accumulated a total of seven (7) silver metals.  The events I have competed in are the 800 Meter Run, 400 Meter Dash, 200 Meter Dash and the Long Jump.  Upon learning that the World Games would be in Los Angeles, I knew this was great opportunity to compete against the world, represent the USA and the Department of State Hospitals (DSH).  In January, my peers (Superheroes) and I decided to commit to the Games.  That would include Investigators Roberto ‘Green Lantern’ Camacho, Jared ‘Hulk’ Rodriguez, Alyssa ‘Wonder Woman’ Gomez and myself, ‘Flash’.   We trained from that point with the goal of participating in the Games.

“This year’s Games were very competitive.  Initially, I registered to compete in the 400 Meter Dash.  I eventually added the 800 Meter Run about a month prior to the Games.  August 08, 2017, I ran the 800 Meter Run.  I managed to finish fourth in the event.  I improved my time from last year’s 2:47 seconds down to 2:28.  I was the first American to cross the finish line.  I feel good about that.  However, I wanted a medal for my mom who passed away in November 2016.  That was a lot of pressure I placed on myself. Thursday, I ran the 400 Meter heats to place in the finals.  I finished fourth in my heat to qualify.  Saturday, I ran the finals knowing I had to past one (1) person to secure a medal based on times in the heats.  The finals presented an unbelievable finish (Thanks Mom) to conclude the end to a heartfelt journey.  I thank God Almighty for letting it be his will that I step on the podium winning a Bronze medal.

“Camacho and Rodriguez competed in the Cross Country 5000 Meter Run and just came a little short of capturing a medal.  Gomez competed in the 100 Breaststroke and added to USA / DSH medal count by winning the Bronze medal.

“The Heroes and I have more work to do as we plan to continue making it known DSH has athletes also.  We enter next season very confident for the USA Police and Fire Games 2018.  If I could use only one (1) word to describe this experience that would be exhilarating.”

Camacho reported that he and his partners ran with competitors from Australia, Brazil, and Japan.  “It was a little overwhelming,” he said.  “But what an experience!”