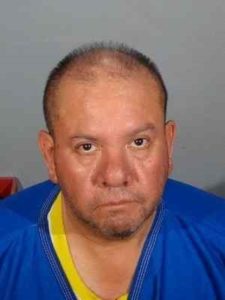 LOS ANGELES – A preliminary hearing has been set for a Whittier man charged with identity theft, forgery, false impersonation, and counterfeiting.   Benito Plascenia, 58, appeared in court on August 24, 2017 at which time a preliminary hearing was set for September 7, 2017.

“For the second time in ten years, Plascenia is accused of stealing a pharmacist’s identity and working as an unlicensed pharmacist in the Los Angeles area,” said California Statewide Law Enforcement Association (CSLEA) President Alan Barcelona.  “He allegedly posed as a pharmacist at various locations for more than a decade, but State investigators have once again put a stop to his alleged actions.”

Investigators with the California Department of Consumer Affairs Investigation and Enforcement Unit – Chatsworth Field Office obtained a warrant for Plascenia’s arrest and Department of Homeland Security agents arrested him July 31, 2017 as he tried to cross the border from Mexico into California, at the San Ysidro Port of Entry.

In 2007, Plascencia was charged with three felony counts of identity theft, one felony count of possession of a forged or counterfeit document, and one misdemeanor count of dispensing dangerous drugs without a license. Plascencia was alleged to have impersonated three doctors and was also alleged to have impersonated the same licensed pharmacist he is currently charged with impersonating. Plascencia pleaded no contest to one count of identity theft and was ordered to serve jail time and pay restitution. He was also ordered not to be involved in any manner with the selling of prescribed medications in a pharmaceutical-like business or other business involving prescribed medicines.

Investigators believe there may be more victims of Plascencia’s in the Los Angeles area. Anyone with information or who may have hired Plascencia is asked to contact Investigator Scott Vredenburgh at the Division of Investigation’s Chatsworth Office at (818) 885-2000.