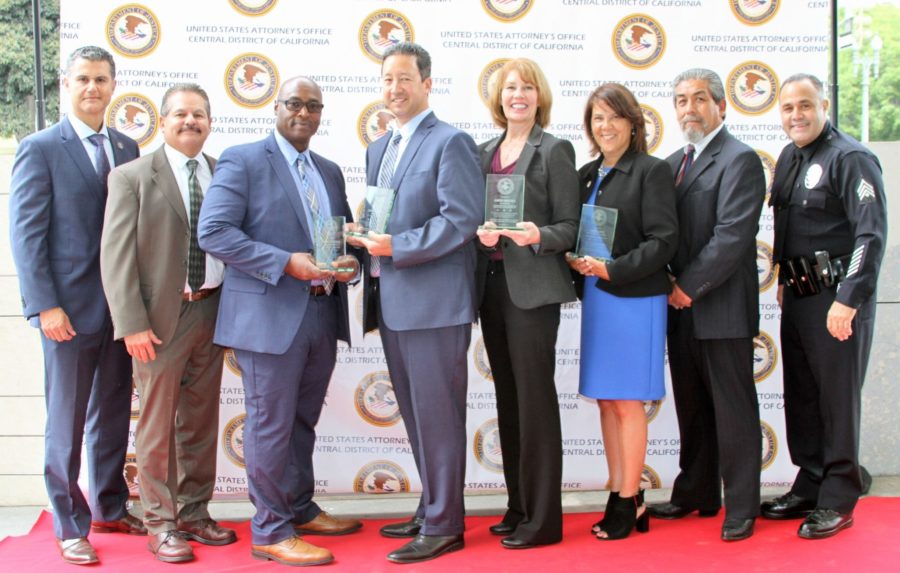 The award recognized Investigator Driscoll’s integrity, commitment, and outstanding service to the people of the United States of America for the below investigation:

Doctor Agrees to Plead Guilty to Distributing Addictive Painkiller and to Forfeit Nearly $100,000 in Criminal Proceeds

Dr. Manasseh Nwaigwe, 72, operator of a medical office in Boyle Heights, agreed to plead guilty to one count of illegal distribution of hydrocodone. As part of the agreement with the government, Nwaigwe will forfeit to the government more than $97,000 in cash that Nwaigwe admits were the proceeds derived from his illegal prescriptions.

In the plea agreement, Nwaigwe admitted on five occasions in May and July 2015, he wrote prescriptions for drugs to undercover law enforcement officers in exchange for cash.  Nwaigwe prescribed the drugs hydrocodone, clonazepam (commonly known by the brand name Klonopin), and promethazine with codeine (a narcotic cough syrup known on the streets as “purple drank” or “sizzurp”) to undercover agents who “did not in fact have a medical need for those prescriptions.” In exchange, Nwaigwe received $90 cash for each prescription.

Under the plea agreement, Nwagiwe will cooperate with the Medical Board of California by surrendering his medical license.  On March 8th, the Medical Board filed an accusation against Nwaigwe that alleged sexual misconduct, prescribing without an appropriate exam and gross negligence.  Under the plea agreement, Nwaigwe also will surrender his DEA registration.

“Amber, you continually achieve optimal levels of performance and accomplishments with your investigations,” said Driscoll’s supervisor, CSLEA- CACI Member Bob Pulido, Commander of the Division of Investigation, Los Angeles Metropolitan Command.  “You are a master of developing clever and imaginative strategies when confronted with obstacles in your investigations.  You are an important contributor to the successes of the Cerritos Field Office and the LA Metropolitan Command.  Your continued efforts consistently exceed performance goals of DOI/HQIU.  Your individual work speaks volumes of the kind of investigator you are – efficient, organized and result-oriented.  I appreciate all you have done to achieve your success.”