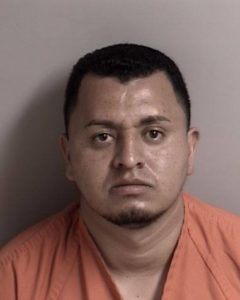 EL DORADO COUNTY – On November 8, 2017, a jury in El Dorado County convicted Manuel Ovidio Ramos-Munoz of seven felony counts including kidnapping and sexual assault for the attack on a 22-year-old woman June 11, 2015.

The victim had recently arrived at in the United States from Macedonia to work for the summer as an exchange student.   She was kidnapped at knifepoint just steps from her South Lake Tahoe motel room and was repeatedly sexually and physically assaulted.  The investigation led to Ramos-Munoz, an employee of the motel.

During the course of the trial, a California Department of Justice criminalist was called to testify about evidence collected.

“Forensic science is such an integral part of investigations and prosecutions,” said California Statewide Law Enforcement Association (CSLEA) President Alan Barcelona.  “DOJ criminalists are some of the brightest minds in forensic science and some cases would go nowhere without them.  Thankfully, this violent individual will remain confined and unable to hurt others.”

“Our hearts go out to the victim and her family,” said El Dorado County District Attorney Vern Pierson.  “We are pleased that we were able to secure justice on her behalf and that this defendant will spend the rest of his life in prison for this disturbing and horrific crime.”

Ramos-Munoz remains in the El Dorado County jail pending sentencing which is scheduled for January 19, 2018.  He faces a maximum sentence of more than 150 years to life in prison.