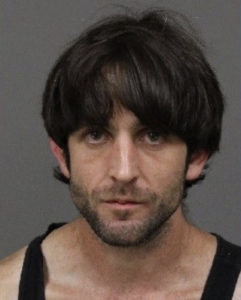 CAMBRIA -  Thanks to a California State Park Ranger, a suspect is in custody following a violent attack on a fellow transient in a homeless camp.   The ranger located the suspect, Kellen Trimble, 32, of Cambria in a creek bed under Highway 1 on Saturday morning, November 4, 2017 many hours after he allegedly hit a man in the face with a hatchet.

“Homeless camps near or in state parks are a real issue,” said Matt Yarbrough, president of the Resource Protection Peace Officers Association (RPPOA) which represents sworn State Park peace officer rangers.  “Some of these transients suffer from mental health issues, are drug abusers, or are criminals hiding from law enforcement.  Part of our jobs as State Parks rangers is to protect the public, those who visit our state parks, from transients who might threaten public safety.”

Trimble is accused of fighting with a fellow transient in a camp and swiping the victim in the face with tomahawk.  He was arrested on attempted murder charges, but after reviewing the case, the district attorney charged Trimble with assault with a deadly weapon. He is in the San Luis Obispo County Jail with a bond listed as half million dollars.

“We want the public to understand the vital role that State park rangers have in keeping people safe from harm while visiting and hopefully enjoying our parks, but quite frankly, there are so few rangers, many times there is just one of us in an entire park.  I’m grateful one of our rangers was able to detain this violent suspect and keep him from encountering park goers.”