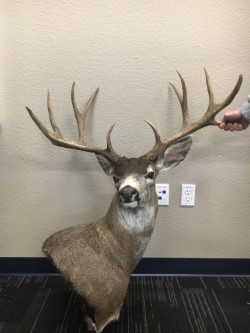 SACRAMENTO – On December 19, 2017,  John Frederick Kautz, 51, of Lodi, pleaded no contest to charges of poaching a huge blacktail deer with trophy-sized antlers in Sacramento County.  Kautz was charged with possession of an illegally poached deer and falsification of deer tag reporting information, both misdemeanors, following a three-month investigation by California Department of Fish and Wildlife (CDFW) wardens.

According to CDFW, Kautz illegally killed the trophy-sized buck on private property in Wilton in December 2016, two months after deer season closed in the area. The deer had an antler spread of 31 inches with four antler points on one side and five on the other, which is an unusually large size for this part of California.

Kautz transported the illegally killed deer across state lines to Nevada to have the deer head mounted by a taxidermist. Kautz was also working through the process of scoring the trophy class buck to have it entered into the Safari Club International hunting record book. The deer’s trophy-sized antlers would have likely been accepted if the animal had been legally taken. However, the poaching conviction for the buck makes it ineligible for that recognition.

California Statewide Law Enforcement Association (CSLEA) and Resource Protection Peace Officers Association (RPPOA) Member Sean Pirtle was one of the CDFW officers who spent three months on this investigation, collecting evidence that would prove the year-old incident was an act of poaching. Through extensive interviews, multiple search warrants and forensic analysis of computer records, and with the help of the California Highway Patrol (CHP) Computer Crimes Unit, the investigating officers slowly pieced together the puzzle. Then, working with Nevada game wardens, who conducted multiple follow-up interviews outside of California, they worked together in an attempt to track down the actual deer that had been mounted by the Nevada taxidermist.

The wildlife officers submitted the case to the Sacramento County District Attorney’s office for prosecution.

Upon pleading no contest to the charges on December 19th,  Kautz was sentenced to two days in county jail, placed on three years’ probation with a search and seizure clause, ordered to surrender the mounted deer head and was prohibited by the court from hunting or accompanying anyone else who is hunting during his probation.

The fine was set at $5,000 pursuant to a new legislation and regulation package which took effect on July 1, 2017, increasing penalties associated with poaching “trophy class” or very large wild game animals.