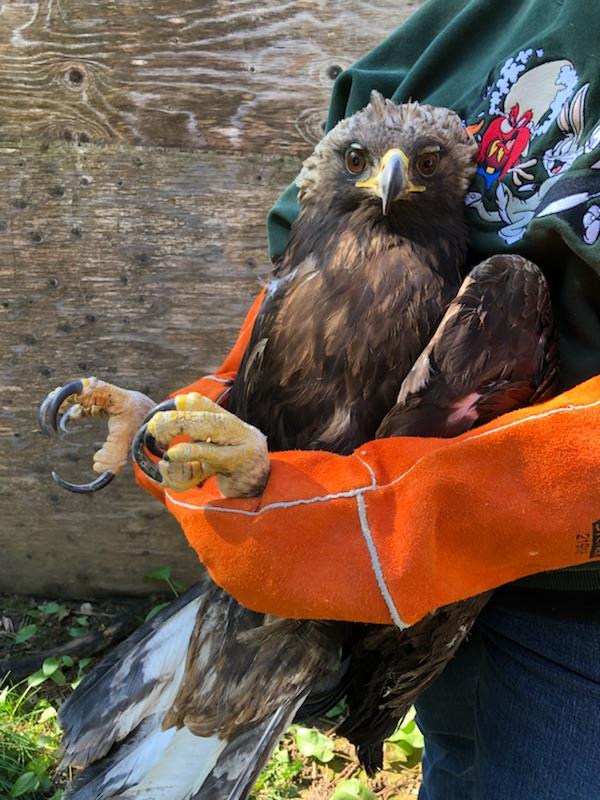 STOCKTON - On Valentine’s Day 2018 two California Department of Fish and Wildlife (CDFW) officers, who are California Statewide Law Enforcement Association (CSLEA) members helped to save a golden eagle that was stuck in the engine  plow of a Union Pacific train in San Joaquin County.  CDFW calls it  of the most unusual circumstances in CDFW history.

Imagine the surprise of Wardens Brad Mello and Justin Cisneros when they received this call for help.  The majestic bird was stuck presumably after being hit by the moving engine somewhere along the tracks between Utah and Stockton. The engineer did not see the incident occur and there is no way to know how long the bird was trapped there before being discovered.

After the train’s cargo was unloaded, a maintenance worker noticed a large bird between the plow and the front of the locomotive. Realizing that it was still alive, the worker stopped the engine and alerted his supervisor, who immediately called CDFW. Luckily, the CDFW Officers Mello and Cisneros had raptor gloves and an empty dog crate in their patrol vehicle and were able to respond directly to the yard.

The massive engine was uncoupled from the cars and moved to the enclosed maintenance facility, where the several thousand-pound plow could be safely removed. For more than an hour, more than  a dozen UP workers slowly dismantled the plow one bolt at a time, revealing the eagle trapped with its wings pinned down and stuck between the plow and the engine.

Warden Mello at first thought the animal was a turkey vulture, but soon realized that the large, yellow beak, dark feathers and long, sharp talons belonged to a golden eagle!  As the workers removed the last piece of the plow, the eagle fell free and was quickly covered with a blanket to keep it calm and easier to restrain. Wardens Mello and Cisneros carefully put the bird into the dog crate along with some branches and foliage that UP maintenance had cut from nearby trees to make the bird more comfortable. 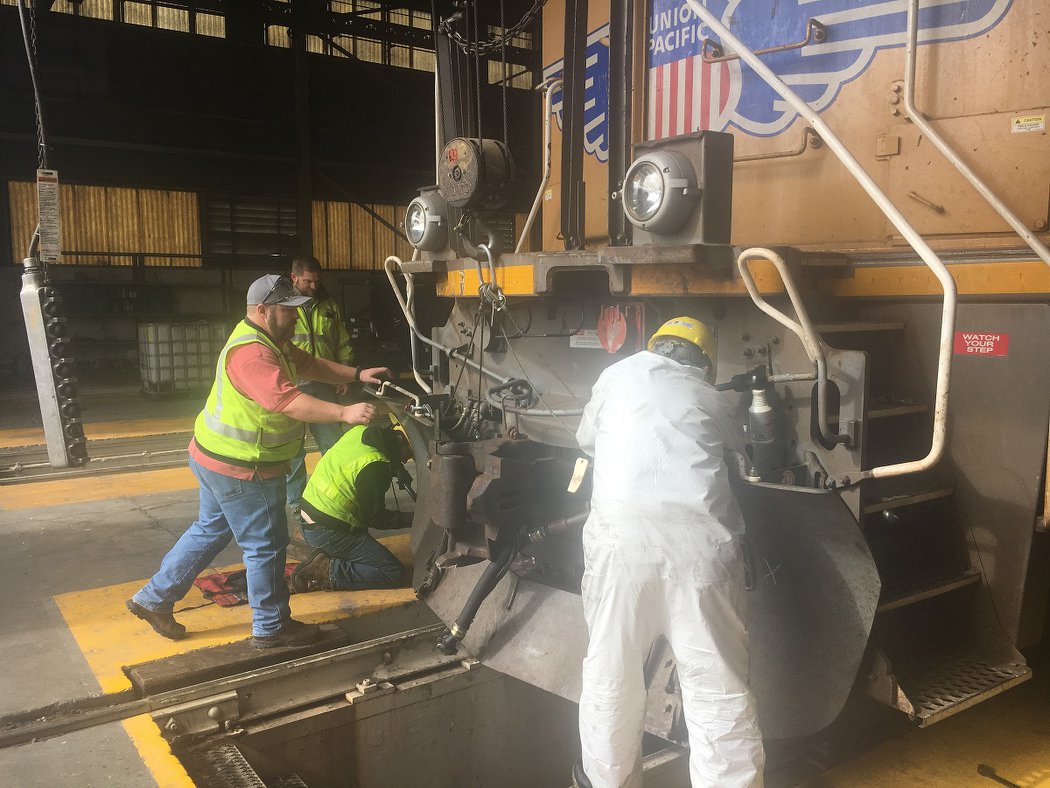 The wardens’ initial assessment was the bird had some abrasions and seemed to be in shock but was otherwise healthy and very strong.

The eagle was transported to Tri County Wildlife Care in Jackson, where it’s now recovering. Officials there are confident that it will recover and be ready for release back to the wild soon.  The golden eagle is one of the best-known birds of prey in the Northern Hemisphere. 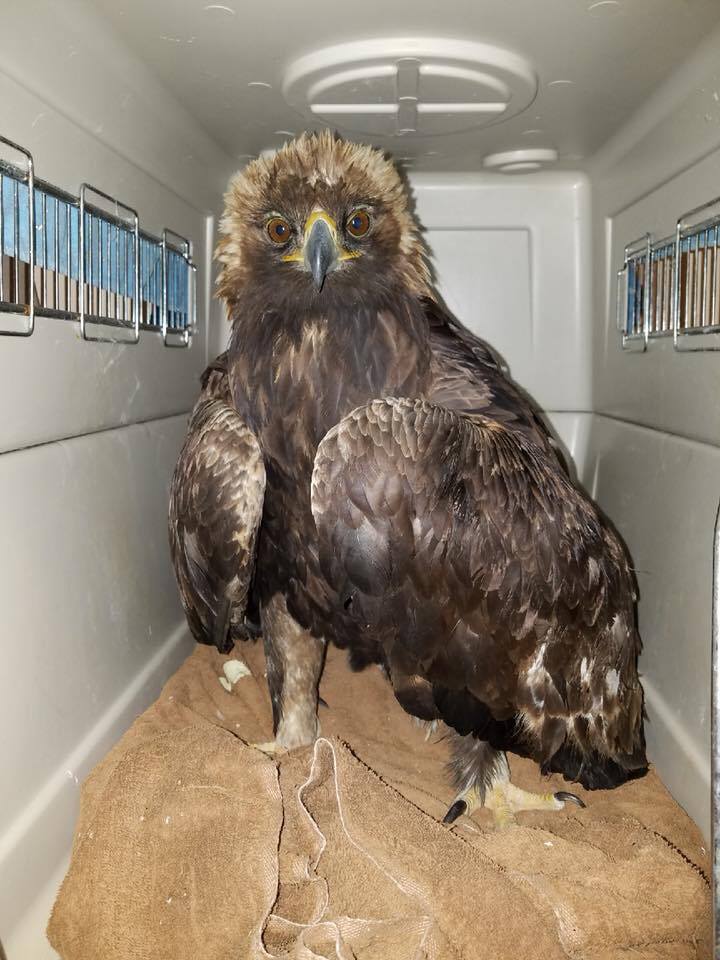 The golden eagle that was rescued and rehabilitated after being struck by a Union Pacific locomotive on Feb. 14 was successfully released back to the wild near Jackson this week. Thanks to a team of rescuers, which included caring railroad employees, CDFW Wardens Brad Mello and Justin Cisneros and the staff at Tri County Wildlife Care, the bird was deemed to be ready for release just two and a half weeks after its ordeal. Thehe eagle was released from a portable kennel at a remote location. He took a walk around the area, looking back at his human rescuers before taking flight. Initially, a few ravens and hawks in the area tried to harass the newcomer, but he spread his wings and quickly outpaced them.  (From CDFW facebook page) 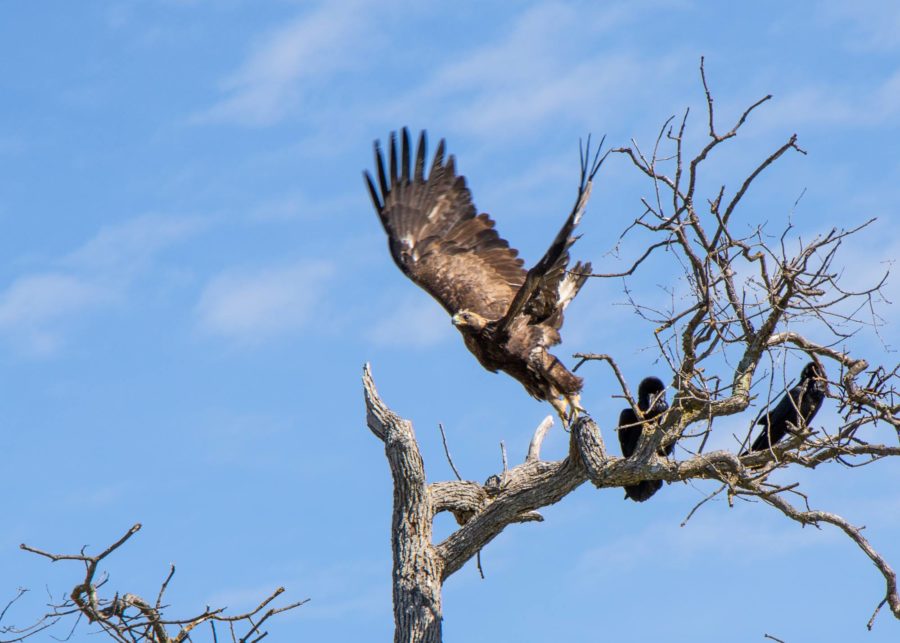