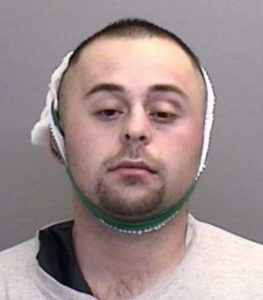 UKIAH -  On March 13, 2018, attempted cop killer Ryan Joseph Maxstadt, 29, of San Jose, was sentenced to 38 years-to-life for the attempted murder a California Highway Patrol officer in south Willits in December 2016.

On December 20, 2016, Maxstadt led officers on a pursuit during an investigation into stolen mail.  It was during that pursuit when Maxstadt shot at the CHP officer with a handgun.

Maxstadt has been in prison before, serving time in 2010 and 2012 and, according to the Mendocino County District Attorneys Office, as a result of realignment laws, was "serving" a county prison sentence for a felony conviction in Santa Clara County at the time of the attempted murder in Mendocino County.

The law enforcement teams that investigated this case were the California Highway Patrol, the Mendocino County Sheriff's Office, the Willits Police Department, the California Department of Justice crime laboratory, and the District Attorney's investigators.

“California Department of Justice criminalists are extremely educated and experts in forensics and can truly make or break a case,” said California Statewide Law Enforcement Association President Alan Barcelona.  “These professionals are key to public safety and criminal justice.”