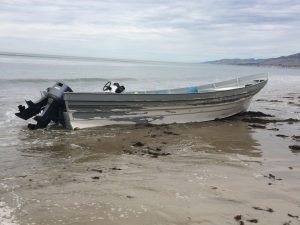 The 28-foot drug smuggling boat equipped with two motors had numerous barrels of fuel on board containing approximately 170 gallons of fuel.  Officers searched the area and located evidence of clothing left behind but were not able to locate any suspects or drugs. 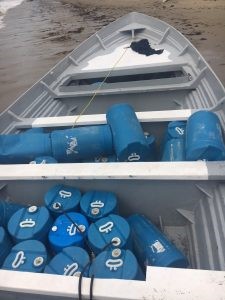 “The Gaviota Coast where the Santa Barbara Sector Rangers patrol has been an area frequently targeted by Mexican drug cartels because of its remote location,” said Sgt. Marcos Ortega, a member of the California Statewide Law Enforcement Association (CSLEA) and Resource Protection Peace Officers Association (RPPOA) who works as a supervising State Parks peace officer ranger.  “State Parks peace officers have been instrumental in assisting allied agencies such as the Coast Guard, HSI, Border Patrol and the local Sheriff's offices in taking down, prosecuting, and preventing these boats from landing on our beaches.”

The Coast Guard removed the fuel and hazardous debris from the boat and DHS facilitated the removal of the beached vessel.

“Our gratitude to CSLEA-RPPOA member, State Parks Peace Officer Dustin Patterson for diligently patrolling the state beach for suspicious and illegal activity,” said CSLEA President Alan Barcelona.  “Having a law enforcement presence and someone to protect the public and our state’s beautiful natural resources is imperative to State Parks, park visitors, and California.”