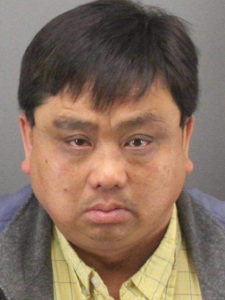 SANTA CLARA- On May, 29, 2018 Tyler Chen, 46, and his wife, Kim, 45, were arraigned in the Santa Clara County Superior Court following their arrest on multiple felony counts of insurance fraud and arson for their alleged role in setting fires to homes and businesses to defraud five insurance companies out of $4 million. Four co-conspirators were also arrested and charged in the alleged fraud scheme.

"Excellent investigative work by our detectives and insurance investigators led to unraveling this crime,” said California Insurance Commissioner Dave Jones. “We are committed to working with our law enforcement partners to bring justice to those who defraud Californians."

“These cases can be difficult and lengthy to investigate but California Department of Insurance investigators and detectives have repeatedly demonstrated they are beyond up for the task,” said California Statewide Law Enforcement Association (CSLEA) President Alan Barcelona. “There is a proven need for them as insurance fraud is big business in this state.”

In January 2014, the insurance department received a tip through its consumer hotline about a connection in a string of home, business and warehouse fires that occurred between December 2011 to September 2013. The tipster gave the exact address of where the next house fire would occur. The department launched a joint investigation with the San Jose Fire Department and the Santa Clara and San Joaquin County District Attorney's offices, which revealed two fires occurred at a business owned by the Chens and shortly after, their homes in San Jose and Stockton met a similar fate.

The residential fires were all reported to have started when chicken being fried was left unattended on the stove. The Chens allegedly orchestrated the entire situation to make it appear as though the fire was the result of a careless cooking incident and then planted many of the same smoke damaged items, which they had already claimed from other alleged fires in homes, warehouses and businesses.

Tyler Chen and his business associate, Ha Nguyen, 63, of Stockton, rented a number of warehouses for an import and export business they owned. According to investigators, the business partners used smoke-damaged belongings to also claim damage from fires in their warehouse or neighboring units. The investigation also found that goods claimed to be damaged in the fire had been purchased, but had not yet been received, which led detectives to arrest Nguyen for his role in the fraud scheme.

The Chens allegedly recruited a family member, a co-worker, and another local business owner to take part in the scheme. The damages claimed in all of the fires total $5,653,665 and $4,009,008 was paid out by five victim insurance companies. These co-conspirators, Trang Huynh, 34, of Stockton, Suong (Sandy) Ngo, 49, of Santa Clara, and Duyen Pham, 49, of San Jose, were arrested as well for their alleged involvement.

The Santa Clara and San Joaquin County District Attorneys’ offices are prosecuting this case. The Chens, Trang Huynh, Suong (Sandy) Ngo, and Duyen Pham are scheduled to return to court on July 23, 2018. Ha Nguyen will be arraigned June 5, 2018.