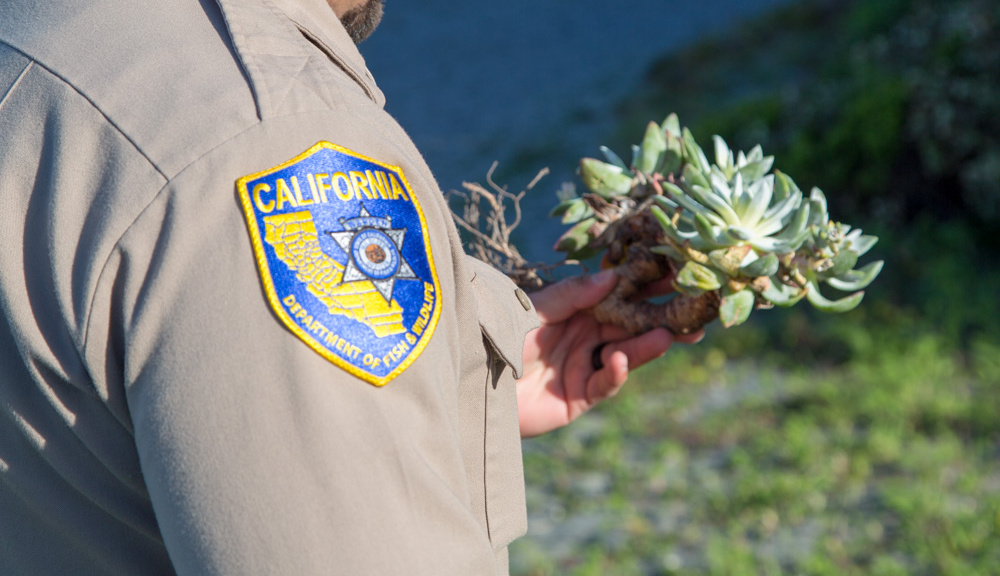 EUREKA – On June 12, 2018, the California Department of Fish and Wildlife (CDFW) and Humboldt County District Attorney’s Office announced that three people charged in a succulent plant poaching case out of Humboldt County have each pled guilty to two felonies and other misdemeanor charges. Felony convictions included conspiracy and false filings with the government.  Misdemeanor convictions included removal of plant material from public lands and commercial sales of plants removed from public lands.

The succulent plants at the center of the investigation are called Dudleyas. They grow in unique niches close to the coastline. Some Dudleya species are rare or at risk of extinction.

The poachers had a network of buyers in Korea and China where Dudleya are valued as a trendy houseplant.

“Thanks to CDFW wardens who acted on a tip and uncovered this illegal activity that was much like a physical assault on our beautiful coastline in Humboldt County,” said California Statewide Law Enforcement Association (CSLEA) President Alan Barcelona.  “Our natural resources are not only beautiful, but must be protected.”

CDFQ officers worked extensively with allied law enforcement from U.S. Customs and Border Protection and U.S. Postal Service inspectors to track down and collect evidence of poaching the succulent plants for sale overseas. During the investigation, wildlife officers witnessed the three removing plants from coastal bluffs in the Humboldt Lagoons State Park. On April 4, officers found the trio in possession of 2,300 Dudleya plants and more than $10,200 in cash.

All three defendants were foreign nationals. Liu Fengxia, 37, of China, and Tae-Hun Kim, 52, and Tae-Hyun Kim, 46, both from Korea, were handed a sentence of three years and eight months in state prison and a $10,000 fine each. Judge John T. Feeney suspended the prison sentences with the conditions that the defendants are prohibited from entering the United States without prior authorization of the federal government and state courts, and prohibited from entering any local, state or national park.

In addition to the fines, the defendants will also forfeit the $10,200 to CDFW as restitution. These funds will be used specifically for the conservation of Dudleya on public lands in Humboldt County.

The case developed from a tip from a member of the public who saw something amiss. Anyone who believes they are witness to unlawful poaching or pollution activity is encouraged to call CalTIP, CDFW’s confidential secret witness program, at (888) 334-2258 or send a text with the tip411 app. Both methods allow the public to provide wildlife officers with factual information to assist with investigations. Callers may remain anonymous, if desired, and a reward can result from successful capture and prosecution.