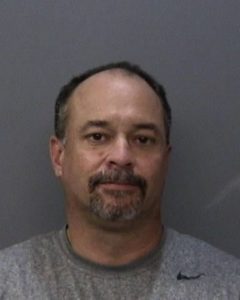 REDDING – On August 20, 2018, the Redding Police Department, the Shasta County District Attorney’s Office, and the Contactors State Licensing Board (CSLB) arrested Troy Arleigh Holladay, 46, of Redding on charges related to contracting without a license in the area of a declared natural disaster, the Carr Fire, and possession of a controlled substance.   The arrest is Holladay’s 19th in Shasta County.

Since July 26, 2018 when the Carr Fire ravaged neighborhoods in Shasta County and the City of Redding, the Redding Police Department Neighborhood Police Unit (NPU), along with other local and state agencies, has worked to help victims rebound from their loss and begin the healing process.

While assisting Carr Fire victims, Redding police officers identified Holladay as someone providing bids to repair fire damage to victims’ homes. Officers believed Holladay was not a licensed contractor and had provided a bid to an elderly female. The bid to repair her damaged property did not have a contractor license number and required a $1,500 cash fee up front which was nearly half the total repair cost. Officers suspected the bid to be overpriced, not prepared by a licensed contractor, and potentially a fraudulent offer. Redding police, in cooperation with the Shasta County District Attorney’s Office and CSLB, conducted an investigation to determine if Holladay was a legitimate contractor.

On August 20th, 2018, they conducted an operation where Holladay was located and detained. During the operation, officers confirmed Holladay was not a licensed contractor and he allegedly arrived at the elderly female’s home under the influence of methamphetamine. Officers also found methamphetamine in Holladay’s vehicle.

“This is a time when homeowners need honest, competent, licensed contractors to help them repair fire damage to their homes,” said California Statewide Law Enforcement Association (CSLEA) President Alan Barcelona. “These fire victims, whether their homes were damaged or destroyed, have been through a very tragic experience, I can imagine their defenses are down and they just want to rebuild.  Thankfully law enforcement is being proactive.”