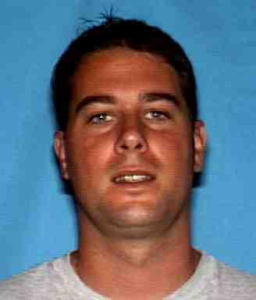 FORT BRAGG -  On August 5, 2018, a  California State Park Ranger located a vehicle at MacKerricher State Park that was registered to a missing person who also had a felony warrant for his arrest for evading police.

“State park rangers are always on the look out for those who may cause harm to park visitors,” said California Statewide Law Enforcement Association (CSLEA) President Alan Barcelona.   “Parks can be very isolated, or as busy as small cities, either way you want a ranger present to keep people safe.”

When the ranger made contact with Eric Ronald Miskey, 45, of Chico, to arrest him on his warrant, Miskey got into his vehicle and fled the campground.  When Mendocino County Sheriff’s deputies arrived to assist the ranger, Miskey drove past their location.

Deputies pulled behind Miskey and initiated a traffic stop but, according to a Mendocino County Sheriff’s press release, Miskey again fled, circling the campground until he drove his vehicle through a wooden fence, nearly missing the parked State Park ranger.

Deputies pursued Miskey out of MacKerricher State Park and southbound onto Highway 1 at speeds in excess of 90 mph.  According to deputies, Miskey swerved in and out of the opposing lane of traffic, as he continued southbound on Highway 1.  Miskey attempted to evade law enforcement by abruptly turning into the driveway of an industrial complex and then continuing into a nearby vacant field, where Miskey was found attempting to conceal his vehicle.

Upon seeing the deputies, Miskey accelerated across the field, jumping his vehicle over a drainage ditch running along the highway and then continued southbound on Highway 1 towards the city of Fort Bragg.  A sheriff’s deputy attempted to navigate the drainage ditch at a safe speed and the patrol vehicle became high-centered, which started a small vegetation fire under the vehicle which was quickly extinguished.  Miskey was last seen driving southbound on Highway 1 from Airport Road.

Earlier this year, Miskey allegedly led Tehama County Sheriff’s deputies on a chase after they received reports of someone slumped over the steering wheel of a car and checked on his welfare.

If anyone has information related to this case or if anyone knows the whereabouts of Miskey, they are encouraged to call the Mendocino County Sheriff’s Office Communication Center at (707) 961-2421 or the Sheriff’s Office Tip Line at (707) 234-2100.