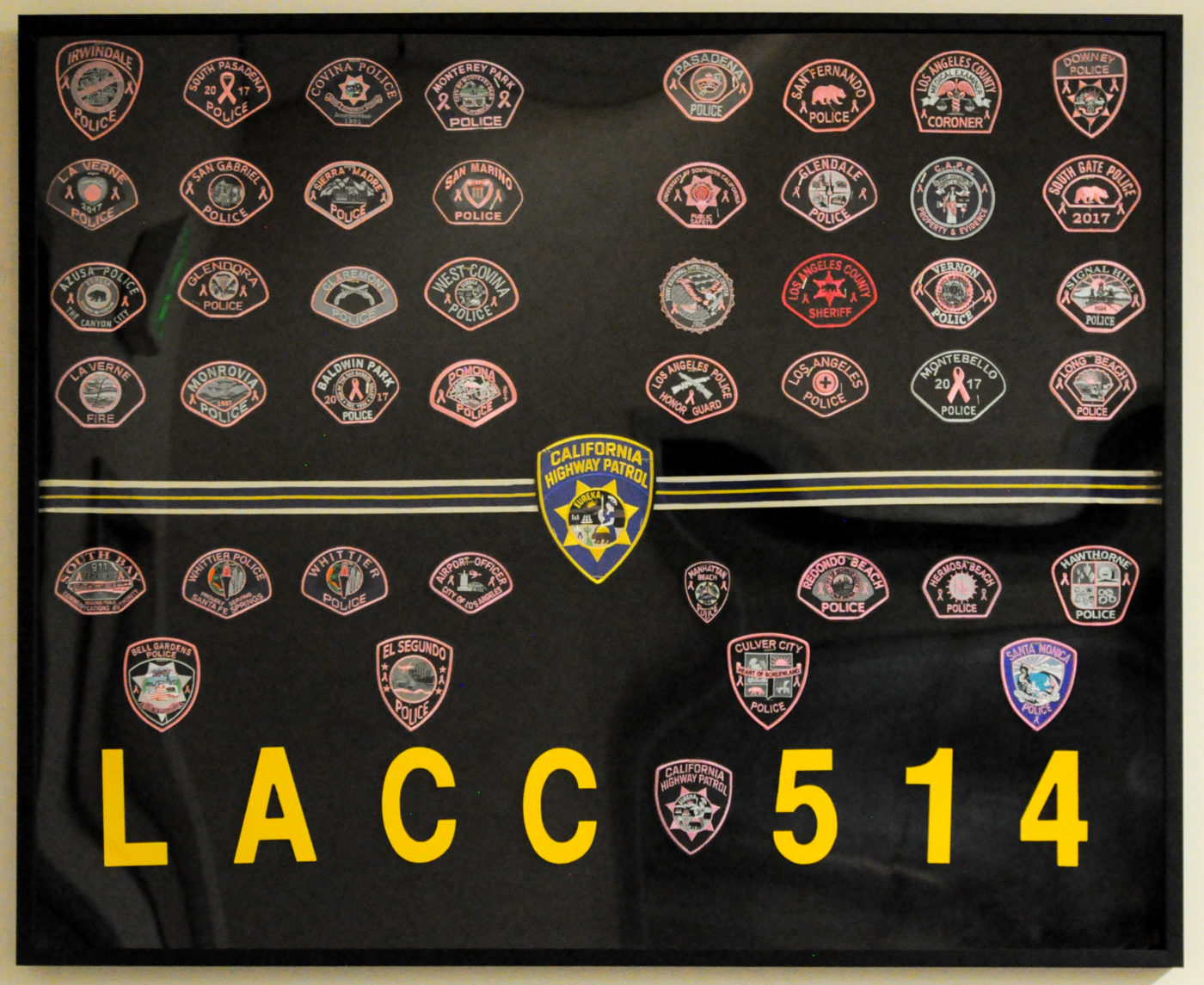 When employees and visitors at the CHP Communications Center in Los Angeles see the display of Los Angeles area public safety departments’ pink patches, the number one question is, “Who did this?”  It was CHP Dispatcher Brian Bustillos’ idea, but he will tell you, “We all did it! And here’s why!” 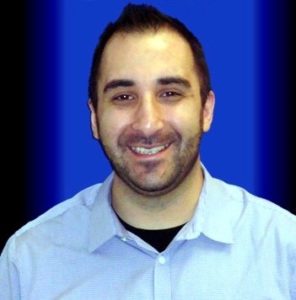 LOS ANGELES -  The Pink Patch Project , the idea came to me shortly after CHP released its pink patch in 2017,  but I didn't know how or what I wanted to do to bring this all together. I was sitting in my office and I saw my shadow box of all the patches of the companies I had worked for as an emergency medical technician (EMT) and dispatcher in emergency medical services in the private sector and that's when I realized how I wanted to pay tribute to this amazing pink patch campaign.

I began researching all the agencies in Los Angeles County that were participating in the pink patch project and to my surprise it was a lot more than I had expected. I chose to use only LA County allied agencies as these are the agencies we, at the CHP Los Angeles Com Center (LACC) deal with on a daily basis.  LACC is the only CHP communications center for LA County and I felt it was important to show how vital these allied agencies are to us in order to complete our mission of Safety, Service & Security.

I drew a diagram, typed an email and contacted command to get permission since I wanted this to be on display at LACC.  With command’s approval, I made a list of all the agencies and created a briefing asking for assistance from any of my peers who wanted to contribute to this project and the response was tremendous. There were so many public safety dispatchers and operators, supervisors & managers who were willing to contribute monetarily, or go to the various allied agencies and buy patches.   Honestly, without the army of patch collectors I had, this project would have never been completed. All together there were more than 40 patches collected from allied agencies just in LA County and all the patches were bought out of pocket.

It was an amazing way to support breast cancer survivors, fighters and cancer research, as well as support our allied brothers and sisters in law enforcement, and to bring a sense of camaraderie to all who participated.

This project began in October 2017 and was finally completed in August 2018. CHP command and management were able to get approval from division to cover the cost of having the frame custom built, the frame measures 55" X 45".

I wanted to do this project more in support of all who have fought and sadly lost a battle to cancer. In my nine years here at LACC there have been far too many of my peers who have been diagnosed with cancer. I lost an aunt in 2016 to a 10+ year battle with breast cancer as well as many other cancers.  in September of 2017, another aunt of mine was diagnosed with lung cancer. I got to thinking, everyone in this office is affected by cancer in one way or another and I felt there should be tribute to those who are fighting and those who have fought.

Everyone who donated or made this project complete signed the back of the frame. This is now a part of LACC’s history and those who contributed should be remembered for their efforts and contributions.

The reaction to this frame has been amazing! It has been a definite morale booster here and many of my peers have taken time to share their happiness and excitement over this board. The board hangs in our elevator lobby and it is the first thing you see when you step off the elevator.  If you visit other CHP area offices you will see banners, plaques trophies and medals of their accomplishments showing their pride for their office. I feel this project did just that for LACC.  No other area office has anything like this and it is truly one of a kind. This project is still on-going. As the years pass and more allied agencies join the Pink Patch Project, we will continue to add more patches. 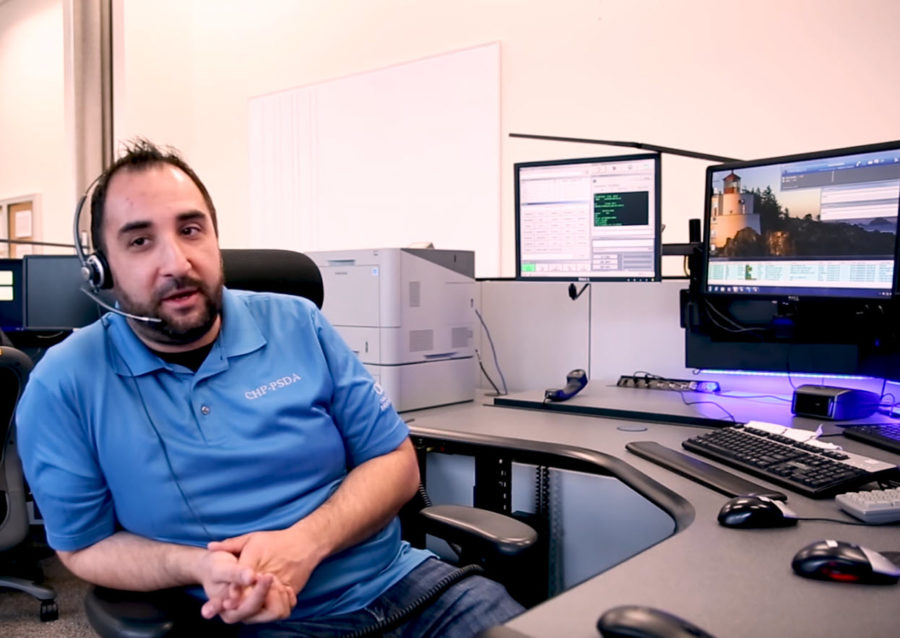 Bustillos has proudly worked as a CHP public safety dispatcher for nine years, celebrating his nine-year anniversary October 5, 2018!  Eight and a half of those years have been at LACC.

“I chose this career because I always knew I wanted to work in the public safety sector,” said Bustillos.  “I was previously an EMT & dispatcher in the private sector and thoroughly enjoyed the work however the pay & benefits would not support me in the long run. In 2008 I began applying with multiple public agencies, tested, interviewed and ultimately chose CHP simply because it is the best agency out there as well as the most stable.  I enjoy dispatching, to me it’s a giant puzzle that constantly needs solving, no day is ever the same as the last and it is consistently changing.”

In 2014, Bustillos  was elected as a site rep at LACC and remains one today.

“I chose to become a rep because my radio trainer and mentor Alana was a rep and now a CHP-PSDA board member,” said Bustillos.  “I saw how she was able to make change and help my peers with issues with supervision and management and I wanted to be able to follow in those footsteps as well. I felt with my previous work history and personality I would be a good fit as a rep as well. Being a rep has taught me more about myself as an individual and as a public safety dispatcher. It has made me stronger and allows me to make sure my peers are treated fairly and equal by management. Since becoming a rep, I was able to serve on our scheduling committee in 2015-2016 as we were approaching possible schedule changes that would affect every single PSD / PSO on the floor. I am able to attend quarterly staff meetings and bring issues to management and command. Also, I have over the last few years primarily worked graveyards, so I have been the only union representation on site during the night.”