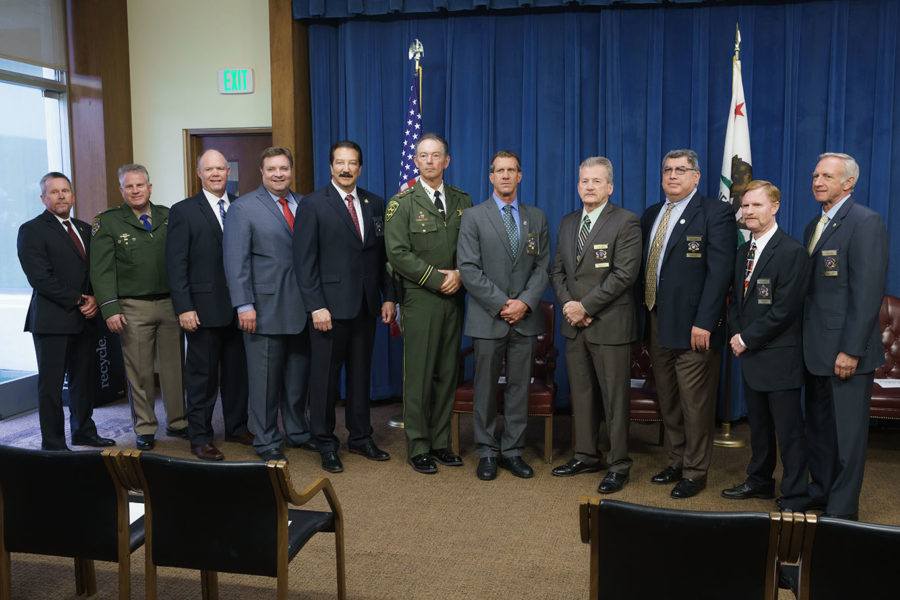 SACRAMENTO – On October 29, 2018, California Statewide Law Enforcement Association (CSLEA) President Alan Barcelona attended the Public Safety Officer Medal of Valor award ceremony as Medals of Valor were presented to five public safety officers from the California Highway Patrol (CHP) and the Yuba County Sheriff’s Department – all of whom went above and beyond the call of duty to save lives.

“I have had the honor and the privilege of serving on the Governor’s Public Safety Officer Medal of Valor Review Board for many, many years,” said Barcelona.  “The CHP officers and the Yuba County deputy sheriff who were awarded the Medal of Valor this year put their lives on the line as they rescued individuals whose lives were in danger.  I thank each and every one of them for their service, sacrifice, and dedication to public safety.”

“The officers we recognized today with the Governor’s Medal of Valor courageously put public safety before their own safety,” said Attorney General Becerra. “They put themselves in harm’s way every day to protect Californians across the state. For this, we are forever thankful.” 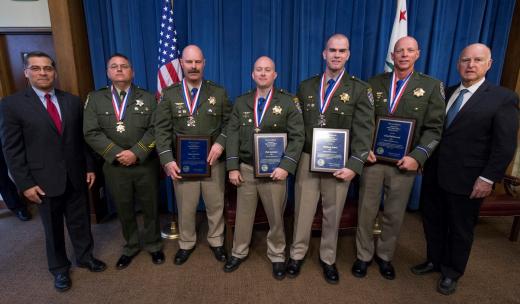 The following individuals were awarded the Public Safety Officer Medal of Valor: 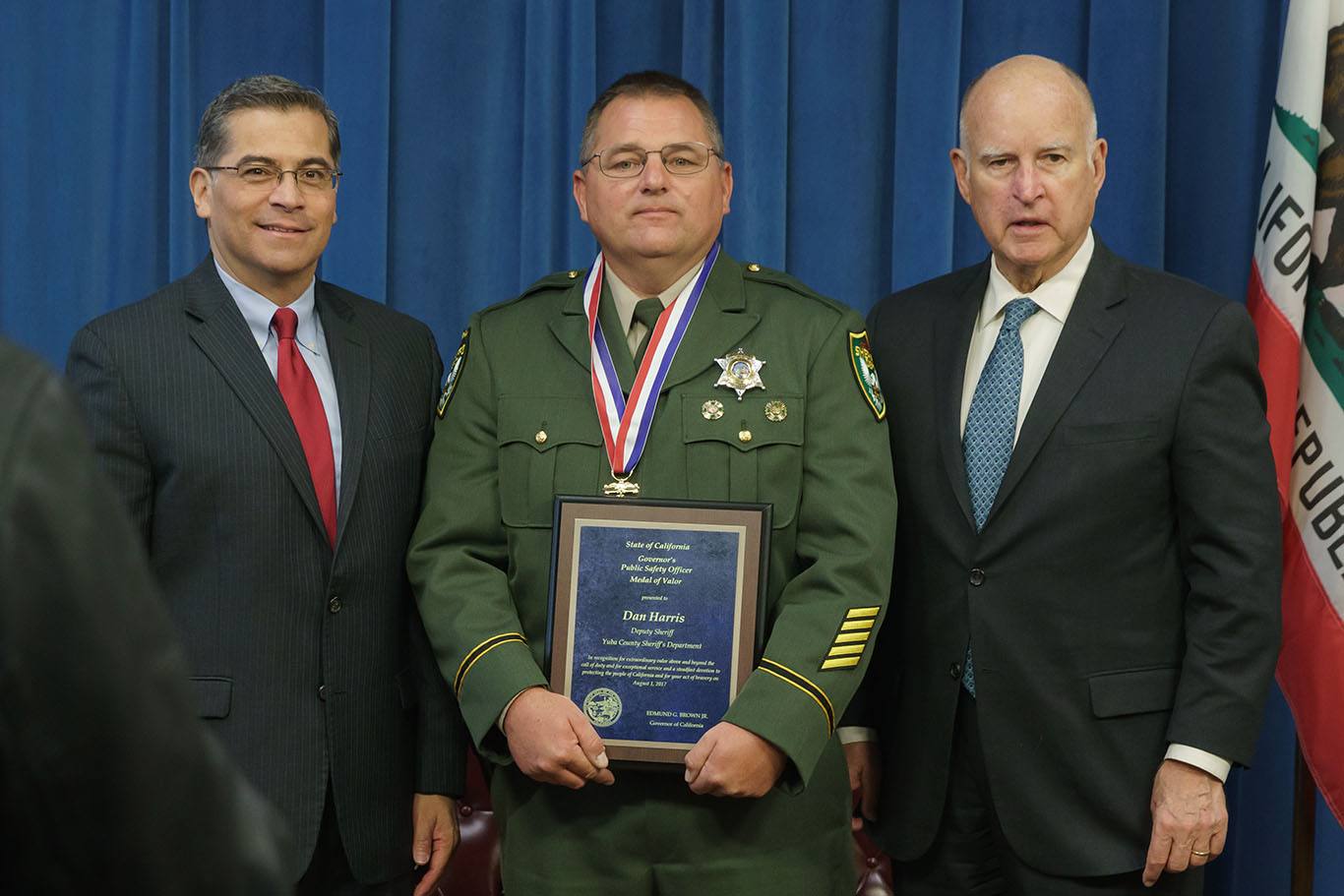 On August 1, 2017, Deputy Phillip Bronson and Deputy Andrew Everhart responded to a disturbance call involving two subjects associated with illegal activity, one of whom was said to have brandished a weapon. The location of the call was a remote residence and the site of illegal marijuana cultivation.  Upon arrival, the deputies confirmed that one subject was in possession of a handgun and a foot pursuit began as the suspect fled the deputies. While in pursuit, the deputies broadcasted for additional assistance.

Deputy Dan Harris, who was on duty, responded to the call although he was not assigned as a patrol deputy that day. Instead his assignment was with the Department’s Marine Enforcement, patrolling the waterways in Yuba County in a boat, dressed in shorts and a polo shirt. When Deputy Harris arrived on scene and met with Deputies Bronson and Everhart, they had established a perimeter around a nearby residence that they believed the suspect had entered. They agreed to have Deputy Harris provide cover at the exterior of the residence because he did not have a ballistic vest in his possession.

When Deputies Bronson and Everhart entered the residence, the suspect, armed with a .40 caliber handgun, began shooting at them from behind a closed door. The suspect continued to shoot as he exited the room. Deputies Bronson and Everhart returned fire. Both deputies were each struck by gunfire three times and the suspect was also struck multiple times. The deputies broadcasted over the radio that shots were fired and they were injured.

Without regard to his own personal safety, Deputy Harris began providing life-saving measures to both deputies, while also updating the sheriff’s dispatch and responding units with critical information. Deputies Bronson and Everhart were airlifted to an area hospital for treatment and are both still in recovery. For Deputy Harris’ extraordinary bravery, heroism and courage in the face of imminent and personal life threatening peril, his actions went above and beyond the call of duty and exemplified the highest standards of a California public safety officer. 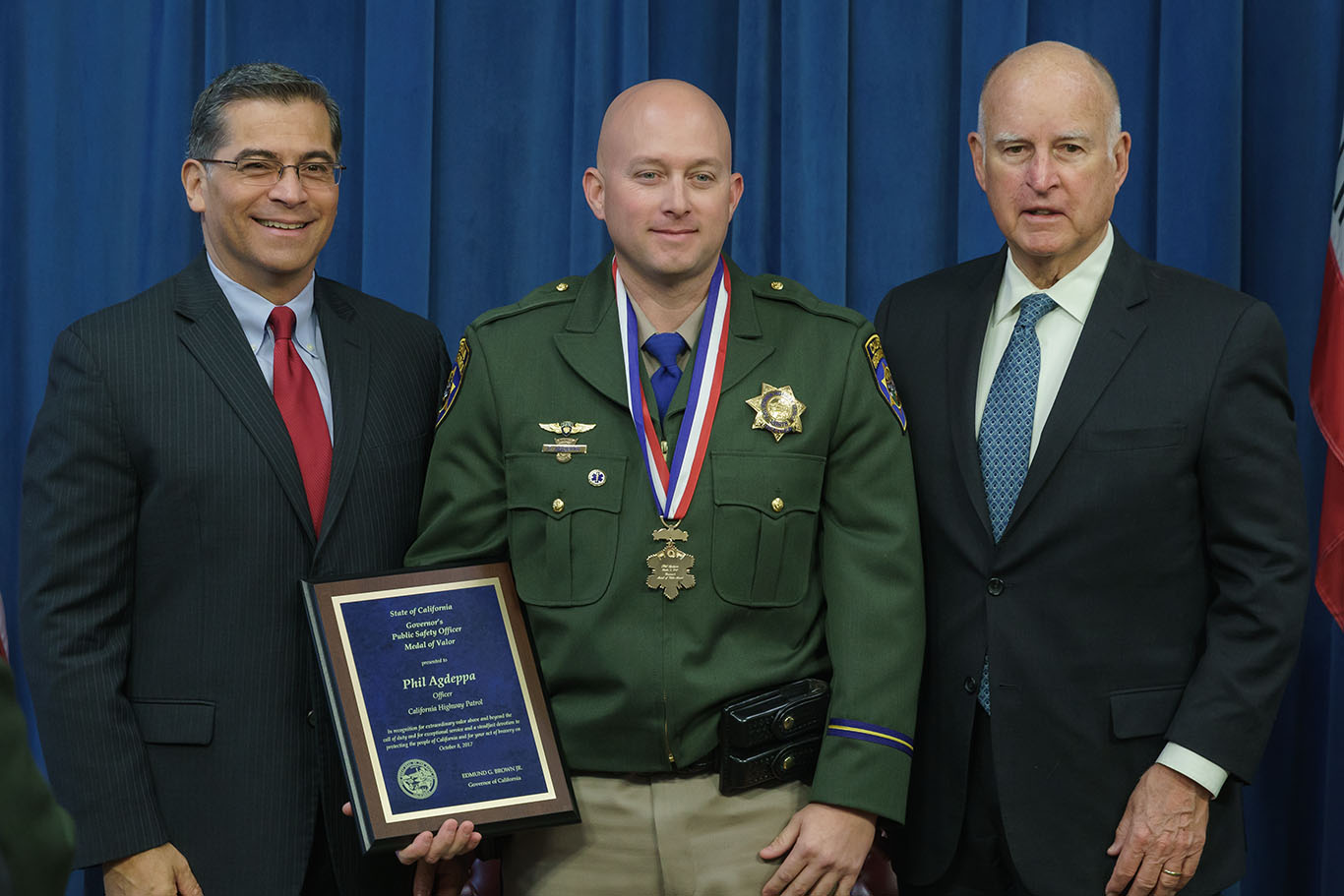 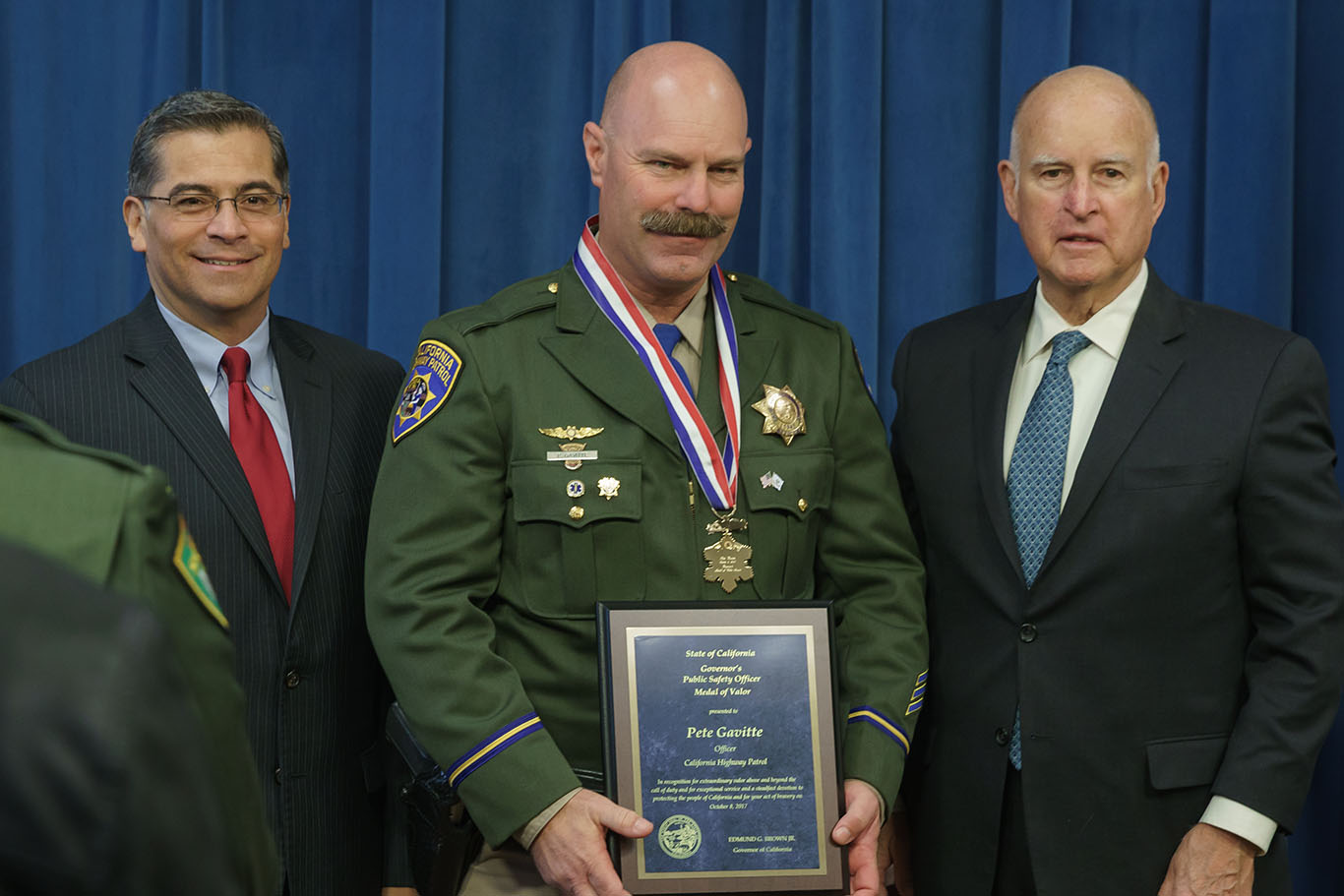 On October 8, 2017, a CHP officer with Golden Gate Air Operations was returning to the Napa County Airport from a surveillance flight and observed a “glow” northeast of Napa – a quickly growing wildfire covering approximately 10 acres. The officer notified the dispatch, who then notified CalFire.

CHP Officers Pete Gavitte and Whitney Lowe, also with Golden Gate Air Operations, monitored the call and responded to the Atlas Peak area of Sonoma County. Upon arriving, they observed smoke-filled air and a towering wall of flames more than a mile long. They noticed that numerous residents were trapped between the fire and the hillsides. Due to the location of the fire and its rapid increasing size, many residents of the Atlas Peak area were trapped above the fire line. The Golden Gate Air Operations crew monitored radio traffic from CalFire calling for evacuations, but as CalFire resources were unable to reach the Atlas Peak residents, Officers Gavitte and Lowe used the helicopter’s public address system, siren and searchlight to alert the sleeping residents.

Officers Gavitte and Lowe recognized that the only escape for the Atlas Peak residents would be by helicopter rescue. Despite the firestorm’s 80-mile per hour wind gusts and extreme downdrafts and updrafts, the officers decided to fly into the smoke and land near the line of vehicles attempting to leave the Atlas Peak area. The helicopter only held four people at a time and the officers realized additional assistance would be necessary. They requested help from CHP Northern Division Air Operations and Officers Chad Millward and Phil Agdeppa responded to the call.

The two helicopter crews began coordinating rescues and identifying drop-off locations as fires continuously overran the landing zones, together saving 41 lives. Aerial surveillance from the night of the rescues shows the rescue area was completely overrun by fire. For their extraordinary bravery, heroism, and courage in the face of imminent and personal life- threatening peril, their actions went above and beyond the call of duty and exemplify the highest standard of a California public safety officer. 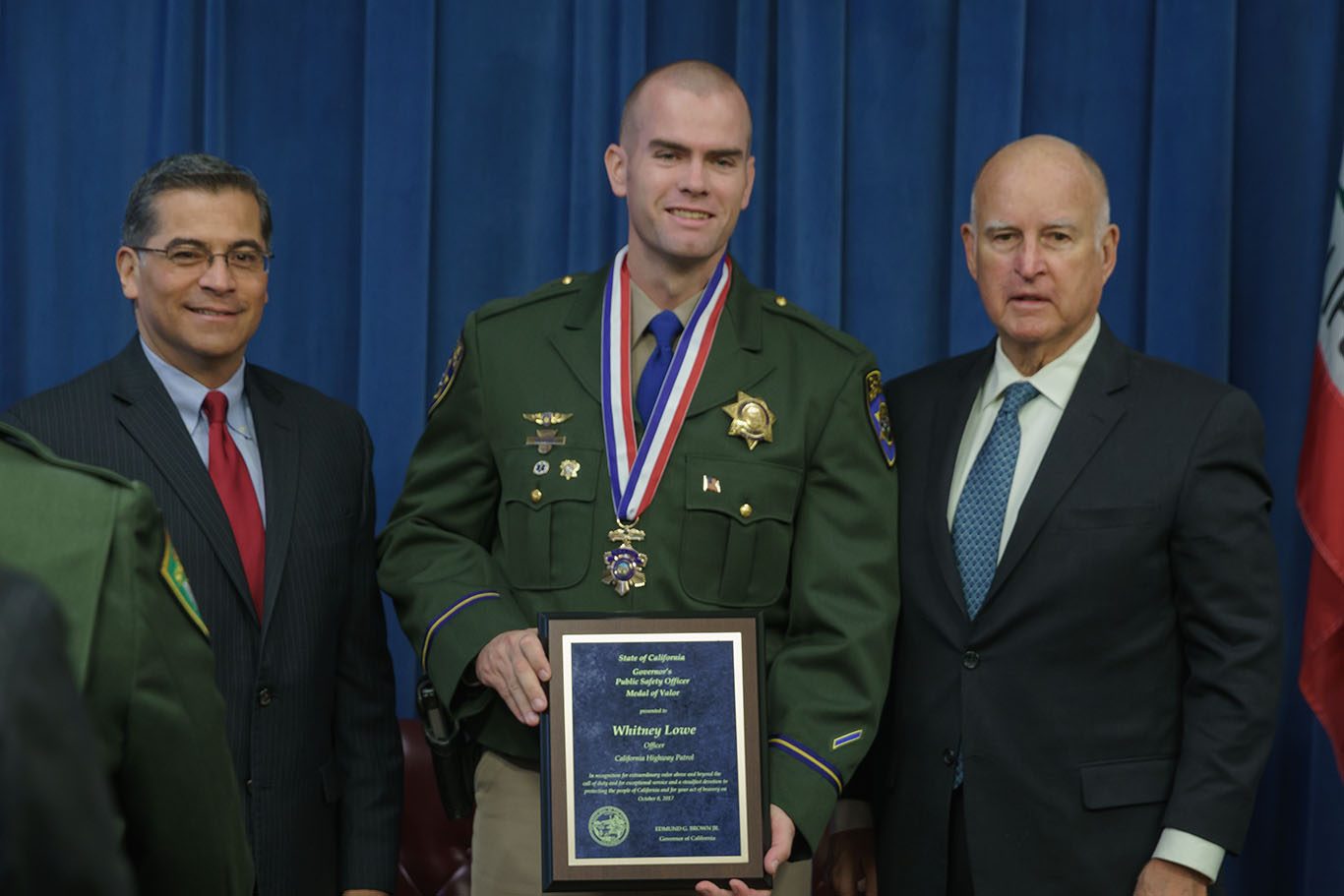 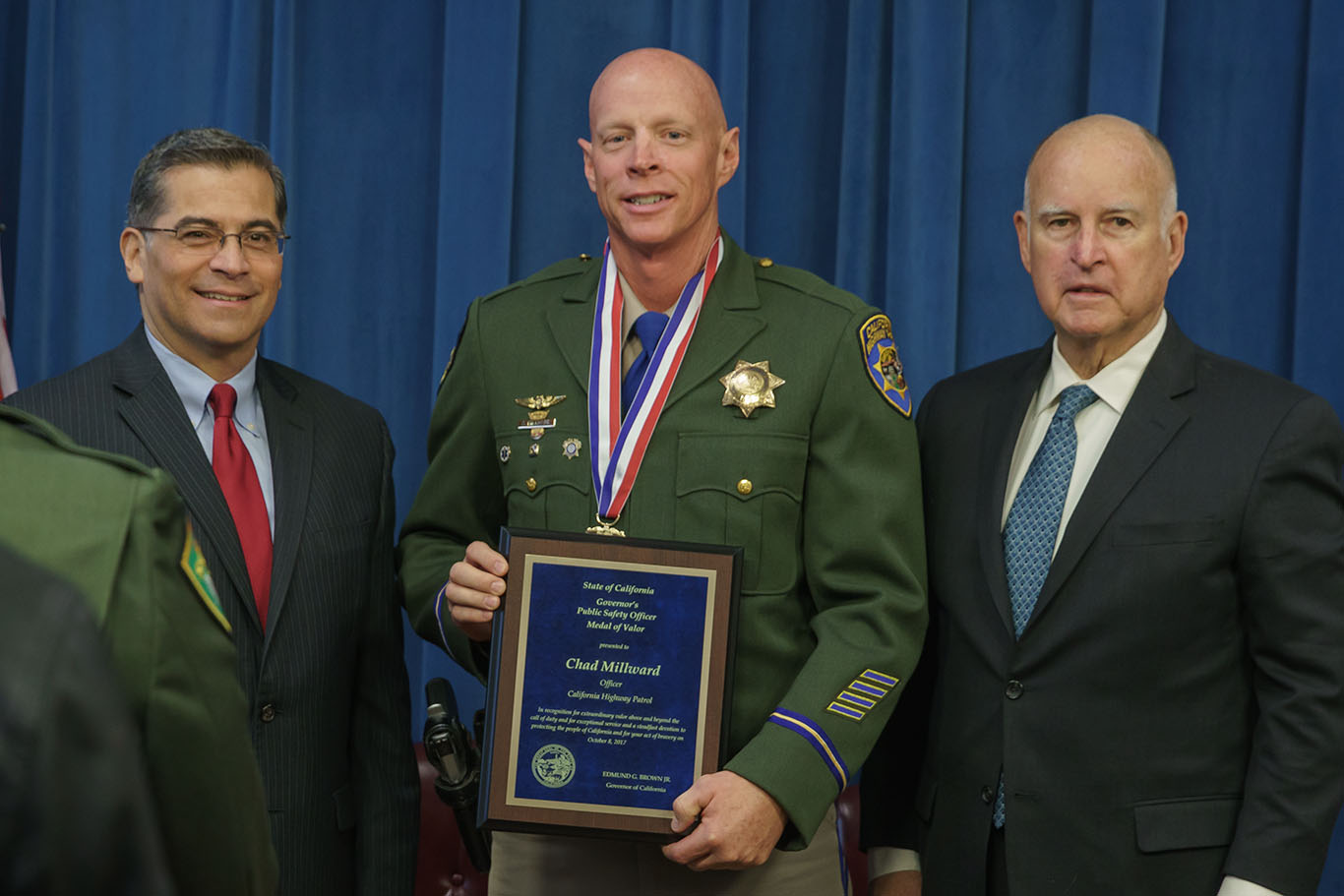