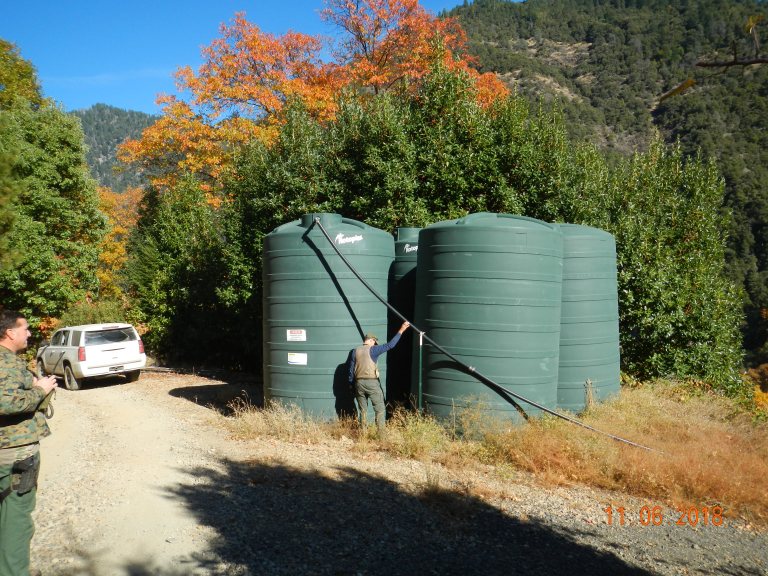 CDFW’s Watershed Enforcement Team (WET), which includes a combination of law enforcement officers and scientific staff, inspected the property and detained 32 suspects. Some of the suspects were armed and wearing bullet proof vests. Two suspects had a fake police officer badge. Eleven suspects were booked into Trinity County jail on multiple felony charges related to environmental crimes. The others were released.

The black-market grow was discovered during routine flights over Trinity County. CDFW observed more than 600 marijuana plants and numerous large water tanks with a large irrigation hose leading into dense vegetation along a creek. CDFW verified that the grow was unlicensed by the state and unpermitted by the county. A record check on the property showed no CDFW Lake or Streambed Alteration Agreement (LSAA) had been filed, no state license to grow marijuana and no attempt to legitimize the operation in the county.

Eleven Fish and Game Code violations were documented including a substantial water diversion from a tributary to the South Fork Trinity River, which provides critical breeding and juvenile rearing habitats for steelhead trout, Chinook Salmon, and several species of aquatic amphibians, including the Foothill yellow-legged frog, a candidate for state threatened species status.

The water diversion consisted of a large hose that was actively funneling water to multiple water storage tanks. Unpermitted water diversions like this are capable of dewatering streams during the summer months, which can reduce or eliminate the reproductive success of the aquatic species that rely on these habitats.